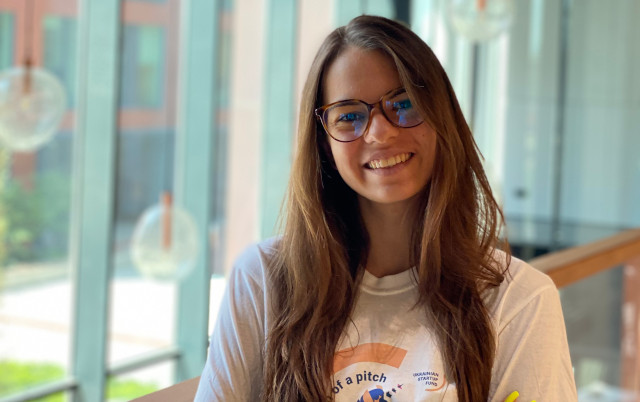 The fight for Ukraine is being waged on many fronts, not just in the bombed-out cities from which we see headline news coverage every day. The fight is equally being waged for Ukraine’s economy, because even the largest common movement of international humanitarian aid will not feed and rebuild on its own the homes of the population of our huge neighbor (area: 603,548 square kilometers, or almost double the territory of our country, Ukraine is also larger than France; population: 44 million). What is needed are companies that give salaries to their employees and pay taxes, they are the ones that largely save Ukrainians from hunger and homelessness – in addition to sending donations, every entrepreneur can help in the fight, sitting comfortably in the company chair. How? We asked Ukrainian Startup Fund – the equivalent of the Polish PFR Ventures. Yana Paladiieva and Evelina Komarnytska, managers of USF answer.

What does the Ukrainian startup ecosystem look like? How developed is it in comparison to the Polish one?

For a long time Ukraine was perceived as a “white spot” on the map of European innovation and entrepreneurship, because even for a long time few players broke through to the global markets; e-commerce platform Rozetka, software company Ciklum or hardware manufacturer Ajax System have been known for years. This, according to my interlocutors, employees of Ukrainian Startup Fund, was something unnatural, given the fact of highly valued Ukrainian technical experts in the world: engineers and programmers.

This situation started to change in 2019, and at this moment Ukraine is already only 9 positions lower than Poland in last year’s Global Innovation Index ranking, and in the Global Startup Ecosystem Index Report co-authored with Crunchbase our countries share only 4 positions (Poland in 30th place and Ukraine in 34th place). Translating data from reports into concrete examples, it is worth mentioning, for example, that during the last three years six unicorns were created in Ukraine, and many domestic startups are already present on global markets (Grammarly, GitLab, Readdle, MacPaw, PetCube, Reface, People.ai, Depositphotos, AJAX, Preply, Competera, Restream, Firefly Aerospace, 3DLOOK, Influ2 ).

What level of development does the Ukrainian startup ecosystem present?

Recent years have seen a “hyperdynamic” development of the startup ecosystem in Ukraine, according to my interviewees. The number of startups in Ukraine began to grow rapidly in 2019, continuing to grow in the following years.

My interlocutors emphasize that the last year was particularly significant for the creation of the ecosystem, when “many first-ever” milestones were recorded in Ukraine: the sudden acceleration of the development of Ukrainian venture funds, the appearance of the first domestic decacorns or research centers established by global companies on the territory of the state – a change in the perception of Ukraine globally.

In Ukraine, as in Poland, a very large share of bootstrapping is visible in the funding structure – this shows that Ukrainian startups are strong, coping without public funds and investors.

In Ukraine’s startup ecosystem, almost half of the companies are currently at the earliest stage of development – pre-seed:

Most startups in the largest cities: Kyiv and Kharkiv, but also in the relatively safe west of the country, the Lviv region.

Looking at the statistics of the Ukrainian startup ecosystem, it’s worth noting which industries are growing the fastest – in which the largest number of startups are active. For example, it’s surprising that interest in agritech is much higher than in Poland (although maybe it shouldn’t be so surprising considering the fact that Ukraine is called the granary of the world) – it’s as much as 12% of all startups (3% in Poland!). The development of the energitech industry differs equally strongly – 13.3% of startups in Ukraine compared to 3% in Poland. Strongly developed are SaaS, MedTech and artificial intelligence related industries.

What is the current condition of Ukrainian startups?

Ukrainian startup ecosystem can be an example for the world how to function in extremely difficult conditions. Despite the war, Ukrainian startups are not giving up and are not closing their businesses. More than 70% of them stayed in Ukraine despite the war, continue to operate and develop their products, their determination is huge. What definitely puts startups at an advantage over traditional businesses is the fact that they are independent of physical factories, production or service facilities – the capital of startups is mostly people and the knowledge they have in their heads, people who can work from anywhere,

Jana and Evelina add, however, that there comes a time when startups can no longer manage on their own – their savings are running out: – Our talents need support already at this point, which is well shown by the results of a survey we conducted:

We are after two months of war – we are at the point where most startups’ savings are running out – they need immediate support.

What kind of cooperation and assistance does the Ukrainian Startup Fund think is crucial at this point?

USF as a public institution of the Ukrainian state, helps startups to survive the war time. For this purpose, we have established the SAVEUASTARTUPS platform, which coordinates assistance and connects startups with business partners, donors and mentors – all players relevant to the survival of our innovative companies.

You can help in several ways, each equally important:

For startups, mentoring is just as important as financial support – report your availability at https://usf.com.ua/mentors/.

As my interlocutors emphasized, sustaining startups is crucial for the survival and subsequent rebuilding of the Ukrainian economy: – “After the war we will need modern solutions more than ever, without them we will not recover from the losses inflicted on us. Startup solutions are an opportunity for our economy to reopen. Remember that the economic battlefront is as important for us as the military one – that’s why it is so important to maintain Ukraine’s innovative potential, to protect what we have achieved.”