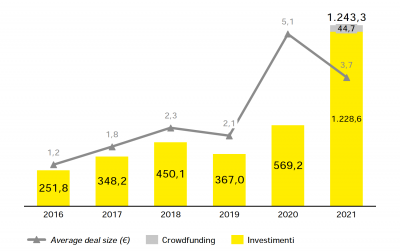 Venture capital investments in Italy in 2021 reached and surpassed the billion euro threshold, touching 1,243 million euros (+118 percent compared to 569 million euros in 2020) with about 334 deals (compared to 111 in the previous year). This is what emerges from theEY Venture Capital Barometer 2021, the study conducted by EY to analyze the trend of venture capital investments in Italian startups and scaleups.

“In 2021 Venture Capital investments continued to grow in Italy. This was possible thanks to the overcoming of restrictions related to the outbreak of the pandemic and the general climate of confidence and growth in our economy. In addition, the very health emergency linked to Covid-19 has led to changes in consumer behavior and business operating models, in response to which many startups have redefined their positioning and strategy, and for this they have been rewarded by the market and investors,” – comments Marco Daviddi, Strategy & Transactions Markets Leader Europe West, EY.

The EY Venture Capital Barometer highlighted that rounds with investment above 20 million euros more than doubled compared to the previous year (12 rounds for a total of 657 million euros of investment in 2021, compared to 6 from 245 million euros in 2020), reflecting a renewed confidence of investors, who are willing to give a higher injection of capital and more support to the country’s realities.

The EY Venture Capital Barometer showed a notable increase in the number of deals of companies in the Pre-Seed/Seed stage (from 53 in 2020 to 233 deals in 2021), setting the stage for growth in future years anchored by a broad base of emerging companies. Also notable is the increase in Late Venture Capital and Growth Equity stage rounds, which far exceed the historical average and testify to a significant maturation of startups within the Italian market.

“We see encouraging signs for a further phase of growth and maturity in the system. In many European economies, the growth of investment in innovation through startups is happening at a higher rate than we observe in Italy. This is due to many factors, including a wider availability of actionable resources, not only from public sources, and a more widespread system of infrastructure and services. Several initiatives, including those related to PNRR, pursue goals that can enable Venture Capital to reach a new level. For example, the initiative of the Ministry of Universities and Research to form National Research Centers and research and innovation ecosystems, including in Southern Italy, will be instrumental in freeing up resources that have not yet been systematized today. It is also important to see how the government, through the MISE, has recently allocated an additional 2.5 billion euros to support innovative start-ups and SMEs,” – adds Marco Daviddi.

“Further encouraging signs come from the exuberance that 2021 has shown compared to past years in terms of liquidity events or so-called “exits” (typically Initial Public Offerings and extraordinary M&A transactions). Exits, in fact, are a key component of a mature startup ecosystem, as they allow the redistribution of liquidity to investors by relaunching the investment flywheel with a multiplicative effect. On this, Italy still shows a certain immaturity in the valorization of its scale-up companies and consequently in the number of liquidity events. But the path charted during 2021 and in this first month of 2022 leaves room for cautious optimism for our country.” – comments Gianluca Galgano, EY Startup and Venture Capital Leader.

Distribution of investments on a regional basis

Geographically, Lombardy is confirmed as the most fertile and promising ground for Italian startups, both in terms of number of deals (175) and capital raised by its companies (66.2 percent of total funding). In general, the trend is positive for the whole of northern Italy (including Piedmont, Emilia-Romagna, Tuscany) and for the Center, particularly Lazio. Less reassuring by contrast are the figures for Southern Italy, which contributed a meager percentage to the record achieved in 2021.

From a sectoral point of view, at the top of the ranking is the Foodtech sector with more than 260 million euros raised, represented by some of the most successful rounds of the year such as Everli, Cortilia and Tannico; next comes the Fintech sector with about 255 million euros raised, represented almost entirely by the result of Scalapay. Conquering third place is the Energy sector with about 164 million euros, thanks to the deal concluded by Newcleo (a startup that develops technologies for the production of clean nuclear energy). In fourth and fifth place, with about 147 and 99 million euros, respectively, are the Proptech and Health & Lifescience sectors. Foodtech, fintech, energy, proptech, and health & lifescience accounted for about 75 percent of total inflows for the year.

The five deals that raised the largest amounts of funding during 2021 were Scalapay (which closed two rounds in 2021 of about €140 million and €40 million); Newcleo (which raised about €100 million); Casavo (which totaled €90 million in two rounds); Everli (with an investment of €85 million); and BrumBrum (funded for €65 million).

ESG, the impact of sustainability on Venture Capital.

“The year 2021 will certainly be remembered for the way ESG and sustainability issues have come to the top of the agendas of financial investors and PE funds; Venture Capital funds are not and will not be outdone, with increasing focus and investment vehicles dedicated to the environmental and social challenges of the coming years. Also from the need to support the process of modernization and sustainable transition of companies and production chains we expect important pushes for the future further growth of VC in Italy,” Marco Daviddi closes.