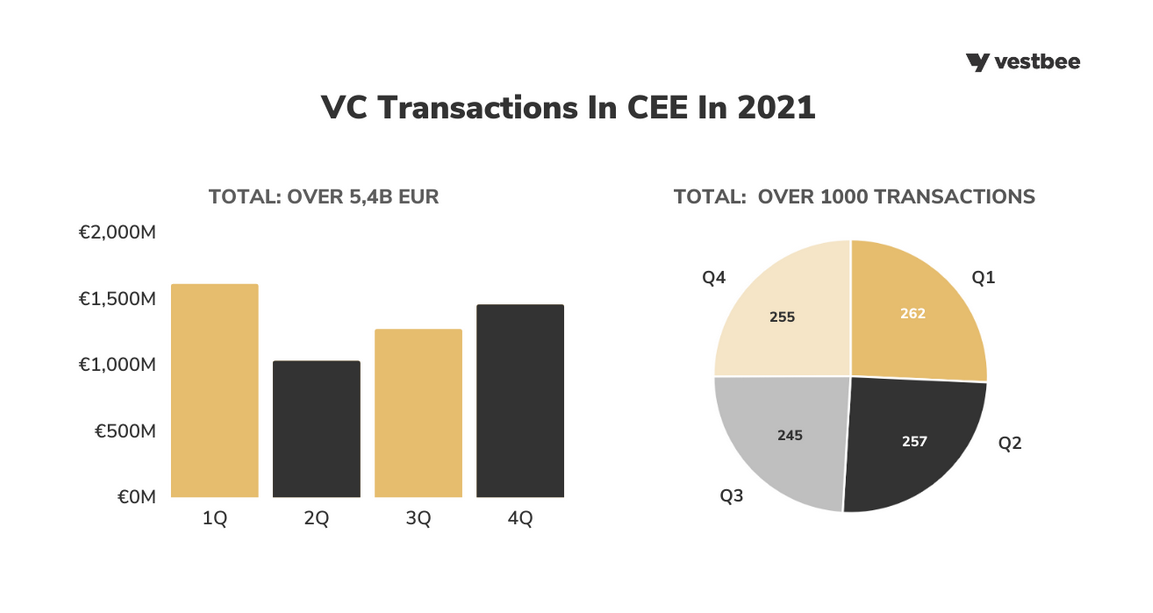 – In recent years the CEE region has seen record growth in venture capital investments, attracting more and more VC funds, also from Western Europe and the United States. – emphasizes Ewa Chronowska, Partner of Next Road Ventures fund and founder of Vestbee. The coming years will only strengthen this trend. Thanks to highly qualified engineers, lower personnel and business costs and a fast growing startup ecosystem, Central and Eastern Europe has become a key point on the map for international VC funds, which are also looking for better valuations and higher returns on investment in our region.

According to Vestbee, Poland, Estonia, Romania and Lithuania were the countries with the highest number of investments, while in terms of the amount of funding Estonia was the leader (€1.2 billion), followed by Poland (€807 million). The most popular industries among investors in 2021 were artificial intelligence, healthcare, online services, e-commerce, finance, shared services, delivery, and analytics, which is reflected in the startups that received the most funding: UiPath – €623M, Bolt – €600M, Vinted – €250M, Rohlik – €190M, and Grammarly – €174M.

We are seeing more and more cross-border co-investments in the region, allowing regional early-stage startups to raise much larger funding rounds of several million already at the seed stage – a good example is Ramp, which closed a seed round of over €10.1M from NFX, Firstminute Capital, Seedcamp, Mozilla, followed by a $53M Series A round with Balderton Capital as lead investor. Strengthening the regional VC community and attracting investors from the US will allow funds to write bigger checks and regional startups to grow faster and scale their businesses globally. – Ewa Chronowska comments.

In the near future, the competition of VC funds for the best startups will increase. In turn, the main motivator for founders when choosing investors will be the added value of their business. We also expect further growth of alternatives to VC funds, such as venture debt for growth-stage companies and democratization of VC at earlier stages.

How will the VC and startup scene in CEE shape up in 2022?

– After a record-breaking year for VCs and startups in Central and Eastern Europe, 2021,2022 promises to be just as good. However, the impact of Russia’s invasion of Ukraine could introduce uncertainty across the region and the global economy, putting a big question mark over global and regional ecosystems. As a result, the amount of capital allocated to regional startups in 2022 may slow down compared to the historic 2021. – Ewa Chronowska highlights.

A compilation of VC deals, a quarterly comparison of investments and brief descriptions of the most interesting startups that completed funding rounds in 2021 in CEE can be found in the full Vestbee VC Transactions In CEE Report 2021 and the TOP 100 CEE Startup Funding Rounds 2021.