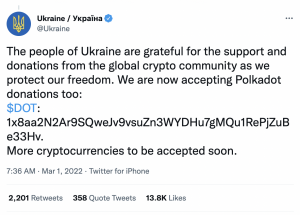 Following Russia’s invasion of Ukraine, the country has reached out for help on Twitter. And it’s not just military equipment and emergency aid they’re asking for – crypto-millions are pouring in from around the world.

The Ukrainian government asked the world for help on Twitter last weekend. In a tweet from 26 February, the government called for people to back the country’s fight against the Russian invasion by donating cryptocurrency to the country.

And the world has listened. So far, 102,000 donations have been made to the government and NGOs, worth a combined total of more than $360 million. That’s according to Elliptic, which updates the amount regularly.

Ukraine is accepting Bitcoins, Ethereum, Tether and Polkadot writes the country’s government in a series of tweets.

However, crypto donations started ticking in as early as 24 February – two days before the Ukrainian government posted the plea on Twitter.

The first donations came from the Ukrainian NGO Come Back Alive, which supports the Ukrainian military. The NGO had previously used the subscription site Patreon, but was banned from the platform because the purpose of the money was to support the purchase of weapons and military equipment, which goes against Patreon’s guidelines.

However, crypto-donations are not subject to any guidelines, and as the currency can be sent instantly and without the need for heavy centralised institutions, this was probably an obvious opportunity to accept donations for Ukraine.

The post Ukraine asked for crypto donations on Twitter. The world responds again with millions of dollars appeared first on startupmafia.eu.