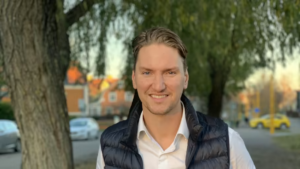 Today, Tioex, a membership platform for investing in unlisted tech companies, announced that it has closed its first investment in the technology company Einride, which develops self-driving electric trucks.

It is Tioex’s largest investment round to date in terms of the number of members who participated.

In total, Tioex enabled 120 members to invest, which is about three times more than the average for previous investments. The smallest investment was SEK 100,000 and the largest up to SEK 1 million. In total, just over SEK 20 million worth of Einride shares were purchased via Tioex.

– Einride is an exciting company that has gone from strength to strength. Over the past year, the company has managed to commercialize the business, successfully launched in the US, attracted high-profile investors and much is pointing in the right direction. There has been a lot of interest among our members to invest in the company. I am very happy that we managed to buy in at this time and hope that we can give more members the opportunity to invest in Einride in the future, says Johan Hägglund, founder and CEO of Tioex.

Since its inception in 2020, Tioex has created opportunities for individuals to invest in interesting unlisted tech companies, such as Klarna, Truecaller and now Einride. Something that was previously almost impossible. The interest in second hand shares is increasing in Sweden and now more people want the opportunity to buy into Swedish privately held tech companies.

– In the last year alone, we’ve seen increased interest in spicing up portfolios with investments in unlisted tech companies. The fact that we now had 120 members participate in this investment and set a new record is something that speaks for it. We also see a shift in who finds their way to us, today it ranges from ordinary small investors who have not had any exposure to unlisted companies before and who want to join the journey, to partners at private equity companies and well-known tech founders, continues Johan Hägglund.