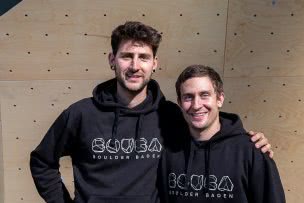 Bouba AG found ideal conditions for the realisation of a bouldering hall on the former Ferro site in Baden. The two founders, Kevin Huser and Dimitri Canonica, look back on an eventful year.

During a bouldering training session Kevin Huser and Dimitri Canonica came up with the idea: “There will be a hall in Baden someday, I’d like to do something like that!” And shortly afterwards, as chance would have it, they learned in a roundabout way about an empty hall on the Ferro site.
They only showed up at the meeting with the landlord with a small flyer. But after that it was clear that this hall was ideal for their vision and they eagerly started working on the business concept.

Thanks to a sports study, an analysis of the competition and empirical values from their professional environment, they were able to clearly establish the financing requirements and all cost items. At the end of October, they contacted Aargau Services for a consultation. The needs of the start-up and the business plan were discussed.
This led to a very valuable contact for the Bouba with an entrepreneur from Baden. When, at the end of last year, the bank granted additional financing, an idea became a real project that could be taken seriously.

The AG was founded in January 2021.
During the entire founding process, the planning of the bouldering hall was going on at the same time. At times, hurdles arose that caused the process to stall again. However, this did not change the positive attitude of the two founders: “It can’t go wrong, it’s such a great thing!

From visualisation to the final result

They designed the floor plan themselves in a very rudimentary way with a 3D model. This helped in the meetings with the wall builder.
Nevertheless, 23 different versions followed until the final design. At the same time, the construction plans were drawn up, including the factors of escape routes, ventilation, electricity, etc., and the building application was submitted. Various stumbling blocks followed. “Every piece of good news was always followed by bad news. Setbacks are part of entrepreneurship. As long as there are more solutions than problems, everything is good,” Kevin and Dimitri told themselves.

At the beginning of the construction phase, the two founders were very personally involved and were covered in black dirt from the work for 15 days. Many construction meetings later, the wall is up, the climbing holds are screwed on and the opening could be celebrated on 20 November 2021.

Tips from Kevin Huser and Dimitri Canonica for other young entrepreneurs:

There are always things you don’t know.
– It is important to have someone in the team who has the finances under control. Full commitment is great, but the money should be invested wisely.
– Find a partner who is not exactly the same as you. The team is crucial – you should complement each other and share the same vision. For the things you can’t do, find someone who can do it better.
– Setbacks are part of business. Don’t let them get you down, but pull each other back up.
– Keep pursuing a good idea.
At some point you will meet someone who also believes in it. Be convinced of yourself.

The post The new bouldering hall in Baden, Bouba, is open! appeared first on startupmafia.eu.