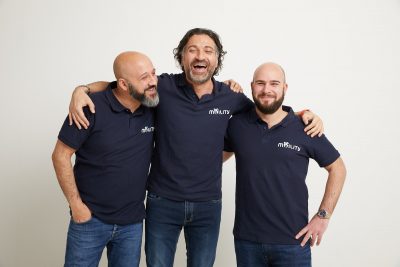 Mbility offers those with permanent or temporary disabilities the possibility of booking one or more rides via App, with full respect for different needs and reduced waiting times. At the time of booking, those who need to travel immediately find out what the cost and expected duration of the trip is by viewing the information on their smartphone.

Mbility, crowdfunding on crowdfundme.co.uk, after far exceeding the minimum goal of 100k is aiming for the maximum half million goal. “Our desire is to enable people who for whatever reason live with a disability to move freely in urban contexts, promoting socialization and the opportunity to access places of study, work, care and recreation,” explains Marco Amico, CEO and Co-founder of Mbility. As with other car transportation services, such as Uber or Free Now, the passenger can rate the drivers. In addition, we thought it was important to give relatives and care givers the opportunity to monitor the route to make sure that everything goes smoothly.”

How the Mbility ecosystem works

Mbility represents the meeting point between the demand for professional transportation by users with disabilities and companies equipped to transport wheelchairs with qualified personnel. The startup is already active in Milan and Hinterland thanks to the support of the City of Milan (which awarded and financed the initiative) and a series of collaborations with local transporters. “We realized that many transportation companies for people with mobility impairments are failing to make the best use of their fleets. There is a great fragmentation in the supply of equipped transportation services and little or no digitization of the operators of these services. By collaborating with Mbility these realities have the opportunity to work harder, while we make the platform known faster,” stresses President and co-founder Alfonso Correale.

Mbility is much more than just an app. Alongside Mbility’s user App that allows users to book rides, there is also an App for drivers. When a driver activates it, he or she becomes visible on the platform and can accept a ride, at the rate calculated by the algorithm. “We thought of a series of services modulated to the needs of different users,” explains Marco Amico. Within the platform is a dashboard for transportation companies that offers benefits such as geo-location of vehicles and a complete digitization of the workflow. With Mbility, managers can save on operating and back-office costs. But Mbility also has a B2B interface that offers tour operators, associations, and companies of all kinds the ability to book transportation services for employees, users, and customers with reduced mobility.”

The size of the problem

In Italy, people with disabilities (i.e., those who suffer due to health problems, severe limitations that prevent them from carrying out usual activities) are 3.1 million, or 5.2% of the entire population of which 1.5 million are elderly non-self-sufficient, a number, the latter, destined to double by 2030 (source: Istat 2019). In addition, about 800,000 people are injured each year with serious consequences that limit mobility temporarily or permanently. The National Observatory on the Condition of Disabilities, (in its hearing at the Prime Minister’s Office on March 24, 2021) reports that the ability to move freely is very limited among people with disabilities. Mobility data, for 2019, show that only 14.4 percent of people with disabilities travel by urban public transportation.

As of December 31, 2021 in just two months of operation, Mbility has totaled more than 100 downloads of the user app and made 563 rides, for an average cost per ride of 37 euros. By 2022, the projected transacted revenue is about 150,000 euros. After Milan, the founders plan to extend the service to Rome, Turin and Genoa, but the business model is designed to be taken to any urban area.

The strength of the team

Mbility can count on a team with varied skills, with years of experience behind them in both international management and entrepreneurship (Alfonso Correale), IT (Daniele Dolci), and in transportation and social (Marco Amico). In the last month, two experienced consultants joined the group of founders: Matteo Brambilla, who will coordinate administrative aspects and partnerships, and Daria Illy, who will be in charge of HR, organization, PR and inclusion. Daria will also be part of the Advisory Board composed of prominent business and social figures such as Oscar di Montigny (Chief Innovability & Value Strategy Officer of Banca Mediolanum), Francesco Galli (President of Sandonato Group). Luigi Passetto (ANGLAT National Board Member), Alfredo Lovati (CEO of Beta80), Riccardo Zagaria (CEO DOC Generici) and Stefano Storti (Jakala Partner).

As a reminder, Mbility is an innovative startup and therefore those who invest in the project enjoy the deductions provided by law.

The post Exceeds 150k campaign for Mbility, the startup that helps people with disabilities get around appeared first on startupmafia.eu.