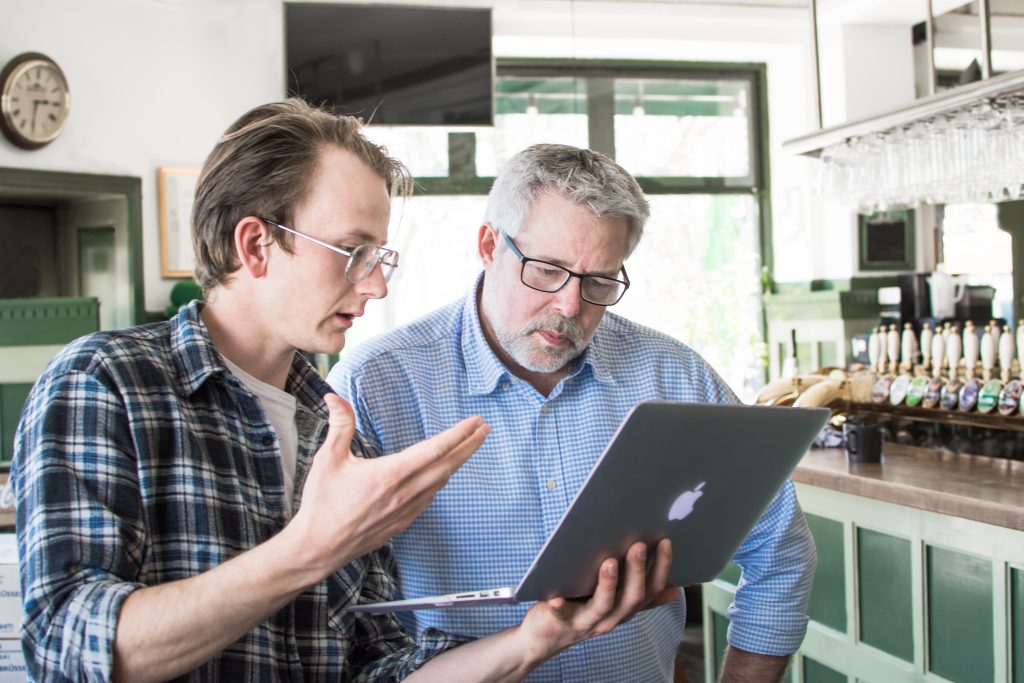 Two fellow students have created a SaaS solution that helps the hospitality industry organise and promote the viewing of live sports matches. Today, they are in the market in three countries, thanks in no small part to some unconventional sales tricks that secured the small, bootstrapped company its first customers.

Many start-ups are probably familiar with the daily struggle of securing new customers in-store. So does Software as a Service company Sport Compass, which helps bars, restaurants, cafés and hotels save time and money organising, promoting and staging events around live televised sporting events.

Once Sport Compass had its product figured out and was ready to start selling in earnest in 2019, it was time to think outside the box. So Simon Sulek, partner at Sport Compass, went with the cold canvas approach – and expanded on it.

“We went through it all: cold calls, emails, video and voice messages and social media messages. In addition, we sent physical letters and voted doorbells. At one point, I came up with sending memes via email, and it worked surprisingly well,” says Simon Sulek.

He adds that he had tried to contact the same bar owner about 20 different times. Only when he sent a meme did the owner respond. The meme a picture of a man standing in the street with a cardboard sign in his hands: “Will customer A save X crowns thanks to Sport Compass?”

“I wrote to the bar owner that I had seen the man just around the corner from his bar and that I thought he was asking an interesting question. Luckily, the bar owner thought the meme was funny and I finally got a meeting with him,” says Simon Sulek.

Simon Sulek from Slovakia is now half of the team behind Sport Compass. The other half is Romanian Calin-Alexandru Buruian, founder and CEO. The two met in 2017 at Copenhagen Business School, where they were both studying a Master in Business Administration and E-Business.

However, Calin-Alexandru Buruian had the idea for Sport Compass the year before – in 2016.

“Together with a friend, I had gone to France, where the European Championships in men’s football were being held. We had tickets to watch some of the matches in the stadium, but we also wanted to watch the other matches. So I came up with the idea of an app that showed which bar you could go to in order to watch that night’s match,” says Calin-Alexandru Buruian.

However, when it came to the point where Calin-Alexandru Buruian started working seriously on his idea, he decided to go in a slightly different direction. Instead of making an app for sports fans, he wanted to help the restaurant industry create more visibility around their sporting events.

Today, the Sport Compass app can tell you which sports matches are being shown on the TV channels the restaurant subscribes to. At the same time, it is easy to promote these matches on social media via marketing tools, while also planning and managing day-to-day operations.

Because the team behind Sport Compass started working on the business while they were students, there were few options other than to bootstrap themselves to growth.

Simon Sulek and Calin-Alexandru Buruian therefore took every opportunity to work at Sport Compass while studying: the CBS Go Grow programme was used for business development coaching, time spent on exchange was spent exploring new markets, and the two fellow students even wrote their thesis on their company.

“Calin went to Munich, and I went to Minnesota, USA. At the time, we had the basic concept in place, so we went from bar to bar and asked the owners if we could take 10 minutes of their time. When you hear about someone going on exchange, you imagine parties and alcohol, but for us it was also about catching up proof of concept from, for example, cash owners,” says Simon Sulek.

Today, Sport Compass has customers in Denmark, Sweden and New Zealand and to ensure future growth, the company has partnered with REEA, an international company that invests in seed-stage startups.

In the future, however, the company will focus primarily on the Scandinavian market, as it can draw on experience in the Danish market.

“Then Germany and the US, where we were on exchange. Because when we were around and talking to bar owners, we also got a lot of expressions of interest. One owner even compared our software to a new gadget: ‘It’s like a new toy. I can’t wait to get my hands on it,” says Calin-Alexandru Buruian.

2022 will also see the building of a advisory boardwhile preparations to bring in investment next year have also begun.

The post Startup of the week: you know cold canvas. Meet Sport Compass who succeeded in sending ‘cold memes’ appeared first on startupmafia.eu.