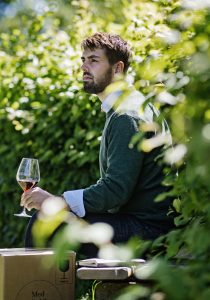 With a new tech platform, Danish Kobaj wants to cut out retailers and distributors and make it possible for private individuals to buy wine directly from local winegrowers. And with exponential growth and double-digit million turnover, the revolution of a 100-year-old business model is well underway, the people behind it predict.

screams hysterical wine snob Miles (Paul Giamatti), who of course stars in the cult wine film Sideways. Because the world of wine can be many things. For some, wondrous and amazing. For others, a maze of snobbery, esoteric tasting notes and inflated sales margins. A world that can sometimes seem many intermediaries away from the farmer and his grapes.

But perhaps that picture is changing.

At least if it’s up to Danish startup Kobaj (pronounced ‘Co-buy’); a new technology-driven trading platform where consumers can join forces to buy wine directly from small, independent winemakers. No distributors, retailers or expensive middlemen.

“Small producers today have to hope to be ‘found’ by middlemen who profit handsomely from consumers overpaying for wines. That’s why we’ve developed a platform that allows winemakers to develop their own brand and sell directly to those who actually drink their wine,” says Alexander Kidd, founder and CEO of Kobaj, about the motivation behind it.

According to the entrepreneur, the idea for the platform came about during a trip to Italy, where he saw an unfair distribution between wine retailers and producers. One experience in particular, at a tasting at a small farm in Montalchino, proved to be pivotal.

“After the visit, the farmer told me to look at his car. I didn’t quite understand, because it was a dusty, rusty people carrier. But when the importers come by the farm, he told me, they all drive Porsches and Audis. The more wine growers I visited, the more I got the same answer: that the industry is importer-dominated and -dictated. They set the rules of the game – and therefore the price. And I wanted to change that,” says Alexander Kidd.

Today, Kobaj users can buy wine from more than 350 producers in 16 countries (including Italy, France, Spain, Portugal, Germany, Austria and the US) and once they have bought 25 cases or more from the farmer, the deal goes through. The boxes are sent to the company’s transit centre in Hamburg, from where they are distributed to buyers across Europe.

Inspired by the hotel and travel industry

Alexander Kidd’s entrepreneurial journey has been varied – from ambulance driver for Falck to McDonald’s boss. But it wasn’t until the Kobaj founder decided to pursue an HD in International Business at CBS that he could really see the start-up dream.

“I had a lecturer in transformation and disruption who always used the travel industry as an example of a system that had so much efficiency potential: a fragmented market with thousands of middlemen and millions of small hotels, where it was very difficult to make sense of supply and pricing. And it was during one of those lectures that some bells started ringing,” says Alexander Kidd, concluding,

“Because just like the travel industry, there’s an unnecessary amount of ‘fat’ in the wine industry.”

Kidd and some friends had started growing wine as a hobby and spent many summers at various vineyards in Southern Europe. But when he subsequently tried to order bottles they had tasted on the trips back home to Denmark, there was always the same problem: shipping costs.

“When you need wine sent from southern Italy as a private person, transport costs so much that it no longer makes sense. But if you do it in communities, suddenly the volume equals the freight costs. And in that thinking, I saw some opportunities,” Kidd says.

It’s no coincidence that supermarkets account for about 85 percent of Danish wine sales. Because bulk buying is traditionally the route to low selling prices, and at the same time it requires enormous storage capacity to build up a mix of wines that will tempt customers.

But the Danish startup doesn’t have a huge inventory. Instead, it has a crossdock in Hamburg, where for 10 percent of the price it handles all the freight, logistics and taxes that have otherwise been the big challenge for similar initiatives like WineJump. Prices are set by the winemaker and are typically 20-40% below conventional market prices.

According to Alexander Kidd, Kobaj appeals to a new type of wine drinker, who is more concerned with uniqueness and locality and less with the fact that the wine is from a particular terroir and produced by fine and established wineries.

“The big producers have built their brand over decades through fine dining, with the sommelier bringing in everything from Bollinger to great Bordeaux to impress. But as the younger generation become wine buyers, we’ll see a shift to small, independent growers making more small and quirky vintages with a unique story behind them,” predicts the entrepreneur.

And while the vast majority at home and abroad still drink conventional wine from the established houses, things have changed. Especially in European metropolitan areas, the natural wine wave is washing over almost every hip bar and restaurant, revealing that the younger generation in particular is demanding a whole new type of branding behind wine.

“Our model would never have worked 15 years ago. Where in the past I might have met a 60-70-year-old winemaker, I now meet the daughter and son who have an international education at a business college. And they see selling wine online very differently. They want to be in constant contact with customers and build a brand and a story together with them.”

“The way you build brands in the wine world is changing. And if wineries don’t manage to connect with their customers when that shift comes, the big wineries will lose out to the small, independent ones with a unique story and approach,” Alexander Kidd explains.

That’s why Kobaj has chosen to shift the focus from the bottles to the winemaker, who will instead have space on the platform to unfold their personal story with the wine.

It took some time before the recipe for success was in place. Alexander Kidd had to make several changes and start from scratch with the start-up. And when the first DKK 250,000 he had scraped together selling his mountain bike, watch and wine collection ran out, he took a night job as a paramedic to devote the hours to the business during the day. He just had to succeed.

In January 2020, the current version of the Kobaj platform went live. Turnover in the first month was DKK 50,000, the following month DKK 100,000, and by the end of the year the startup had turned over DKK 10 million. And that attracted investors.

Today, the company has gone through two pre-seed rounds with angel investors and one seed round with foundations, raising around DKK 40 million in total.

In 2021, the company had a turnover of approximately DKK 30 million and now has a total of 21 employees with offices in both Ballerup and Hamburg.

“Every time we enter a new market, the value for both customers and manufacturers increases. We consolidate more buying power and can thus attract more and more manufacturers who see the smartness in cutting out distributors and the like and just selling directly to their customers,” says the founder.

Things are moving forward. To say the least. But what’s the mission from here?

“Now it’s about showing that we can continue to grow and put the right team of technology and supply experts in place. So we can show impressive traction for a possible Series A investment round,” Kidd says of the future.

And the entrepreneur has no doubt at all that the platform is going to revolutionise the world of wine.

“It will be the new way to trade wine and the new normal. There’s a paradigm shift happening and we want to grow aggressively before new competitors arrive. The only question is how long it will take. So I have no doubt at all that Kobaj will be Denmark’s next unicorn,” says Alexander Kidd.

The post Startup of the Week will revolutionise the world of wine: “I have no doubt at all that we will be Denmark’s next unicorn” appeared first on startupmafia.eu.