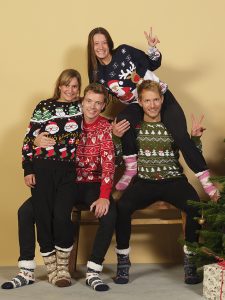 Christmas is upon us, the feast of hearts, and while you can’t go to Christmas parties or meet for mulled wine in the same way this year, there are other ways to keep the traditions alive. Instead, more and more people are turning to dressing up for ‘Christmas’ – because there’s nothing more disarming than a kitsch Christmas sweater that stands outside the fashion box and instead just uncompromisingly announces: Merry Christmas and Happy New Year!

The phenomenon has long been a big hit across the Atlantic, but it’s now a thing here too. Christoffer Sloth Henriksen and Jesper Ahm Sørensen, who started the company Jule-Sweaters in 2016, are particularly aware of this; a webshop filled with hundreds of different Christmas sweaters. And they did it before the wave had even really reached Denmark.

“Back then, Christmas sweaters weren’t really a trend here in Denmark. But it makes sense that Danes have embraced them. As people, we’re not so self-conscious and we put a lot of priority on things being cosy. If you come dressed in a garish or wild Christmas sweater, it automatically makes people drop their shoulders, laugh a little and get cosy. They say Christmas is a magical time and I think we can add 10 percent to that.”

“Even if you gave Hannibal Lecter a Christmas sweater, he’d be nice to look at too!” Christoffer Sloth Henriksen says with a smile.

Something tells me they’re on to something. Over the past four years, Jule-Sweaters has only gone up: in 2020, the company had a turnover of DKK 11.5 million and is now present in nine countries across Europe – particularly the Swedish, Norwegian, German and Italian markets.

It took an unexpected turn

When Jesper Ahm Søren and Christoffer Sloth Henriksen were living together in Guldsmedegade in Aarhus, where they were both studying at business school, an opportunity arose to take over a batch of Christmas sweaters that Jesper’s brother had been selling with his girlfriend for a year, but did not have the profits to continue.

The entrepreneurial friends shared the joy of having fun, started up the Friday bar together at the studio and, as best friends, agreed to go down the entrepreneurial road together. So of course they jumped in.

But in reality, selling Christmas clothes was just supposed to be a sideline. A placeholder, until the boys came up with a better idea.

“We’ve both always had this dream of being entrepreneurs. So when we got the opportunity through Jesper’s brother, we jumped at it. But at the same time we thought, now we’ll do this while we wait for the ‘right idea’. Now we’ve found that we’ve had it in our hands all along,” says Sloth Henriken.

The boys started out selling the sweaters online and at Christmas markets. But they quickly expanded the business and dove deeper and deeper into both production, the value chain and eventually the design of the kitsch Christmas motifs. They got hooked on the Christmas sweaters.

“We just have to face the fact that it has taken an unexpected turn,” says Christoffer Sloth Henriksen with a grin.

Design the sweaters yourself

The wave of colourful and loud Christmas clothes has long been a staple of the festive season in the US and UK, among other countries, and the notoriously kitsch Christmas sweaters often make people think of films like Love Actually, Bridget Jones Diary and Step Brothers.

One of the things the entrepreneurial couple appreciate about the discipline is the composition of the sweaters themselves.

“It wasn’t long before we also went into the actual design process. Now we have reached a point where we sit down with our designer every year and choose motifs, designs and colours – especially based on the large amount of data we have gathered together about what customers are asking for,” explains Christoffer Sloth Henriksen.

For the entrepreneurs, the pop culture references are one of the fun things about going to work. ‘All the jingle ladies’ or ‘The ice is melting at se pøules’ are just a sample of the lines some of the sweaters carry.

“We always agreed that it should be fun. We want to mix humour with business. And the more designs we come up with, the more choices customers have, and suddenly we have something for everyone. Everyone loves to dress up – otherwise Aalborg Carnival wouldn’t exist,” says the entrepreneur with a twinkle in his eye.

Banks had no faith in Christmas clothes

Today, Jule-Sweaters is doing well, with Jesper Ahm Sørensen in charge of finance, administration and day-to-day operations, while Christoffer Sloth Henriksen handles sales and marketing on a day-to-day basis.
But as a relatively unknown phenomenon, it was initially difficult for the entrepreneurial couple to find funding for the business. Several banks simply couldn’t see the point in selling kitsch Christmas sweaters.

“We could easily see it from their side. Often we were sitting in front of a banker of 55, and when then two young, Jutlandic guys want to borrow to 7 million for Christmas sweaters, we understood well why they had doubts.”

“The business has simply been intangible to many. So we’ve had to scale naturally. But year after year, we’ve proven that we’re a good, healthy business. And with the new investment, we’re starting to be in a place where we can expand the way we want to do it,” the co-founder says of the strategy going forward.

This meant that for several years the startup had to run it all bootstrapped. But in October 2020, Investor Hub Viborg bought a 30 percent stake in the company, and since then it’s been a lot easier to scale the business.

“The Danish consumer is very quality conscious. We are used to good service. That makes it easier to scale to other countries because other nations don’t have the same level of service quite simply.
But that’s why it’s still expensive to be growth-oriented. It takes a lot to enter new markets,” says Christoffer Sloth Henriken.

Still, the people behind Jule-Sweaters are not shy about saying their dreams out loud.

“Of course we want to be the biggest in Europe,” the entrepreneur announces with a grin.

The post Startup of the week: while waiting for the right idea, they sold Christmas Sweaters. Now they’re turning over millions and want to be Europe’s biggest appeared first on startupmafia.eu.