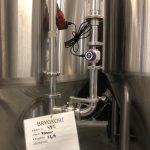 Zymoscope has developed a revolutionary new analysis tool that gives beer producers far more insight into the fermentation process than ever before. After a series of pilot projects with microbreweries Empirical and Flying Couch, the Danish startup is now getting ready to go to market with the support of the Danish Growth Fund.

These days, the heat and the world are slowly returning, and for many, so is the thirst for beer in the sultry summer evenings. But: What to choose? Because in the hip parts of the Danish food scene, giants like Carlsberg and Heineken are all but banned in favour of the microbreweries that are popping up here, there and everywhere with a wide range of speciality beers and naturally fermented drinks.

And while fermentation can be traced back to 7,000 BC, producers may become even wiser to the process in years to come. That’s because Danish startup Zymoscope (formerly Biranalyzers, ed.) has developed a new analytical tool that gives beer, wine and kombucha brewers, among others, vast amounts of fermentation data and a better understanding of the microbiotic processes in the now popular and flavorful beverages.

“The brewing industry is borne of good and proud traditions, but perhaps also suffers from a lack of digitalisation for this reason. With our solution, brewers can first and foremost compare different batches of the same beer or yeast type from a large data base and thus easily assess what they are doing right and where improvements can be made,” says Mads Andersen, CTO and co-founder of Zymoscope.

The solution is an external measurement device mounted on the fermentation tank where the beer is fermented, which interacts with Zymoscope’s intelligent data platform app to show the fermentation in real time. With the platform’s algorithms, producers can efficiently assess whether the beer has finished fermenting, thus freeing up space for the next batch more quickly. Because the measurements are based on CO2 pressure, the device is never in direct contact with the liquid itself. And that’s a first for the industry.

“Every time you expose your beer to outside elements, there is an increased risk of contamination. At the same time, small and medium-sized breweries usually have 20-30 tanks, and having to manually measure them 1-2 times a day is both time-consuming and often results in a delayed and inaccurate measurement, which forms the basis for brewers’ decisions. This can easily lead to fluctuations in both quality and product,” explains Mads Andersen, who also has a degree in nanoscience from the University of Copenhagen.

In addition to streamlining logistics and production, the measurements make it easier for the brewer to monitor the fermentation process and thus optimise consistency and taste when comparing with previous batches.

The adventure started (of course) in a beer bar

The sensors on whichZymoscope’s solution is based were not originally intended for fermentation in beverages, but rather for pollution in the air.

“When I was studying nanoscience at the University of Copenhagen, I worked on developing sensor technology for monitoring air pollution in a startup. At one point, just for fun, I started testing the sensors on wine, which resulted in a lot of interesting results that planted an idea in me,” says the entrepreneur.

The idea was to use the same technology to measure carbonation levels in beer, among other things. So Mads Andersen quickly gathered a number of friends and acquaintances from the restaurant and brewing industry one cold November evening at a beer bar by the lakes in Copenhagen. The aim was to test the waters to see if there was any interest at all among the professionals.

“Shortly after, I went for a run with my co-founder Petros (Venetopoulos, ed.), who I knew from college. We quickly agreed to throw ourselves into it, and then we ran straight to the KU Science Hub to see if we could get a place with them with our project.”

The two entrepreneurs quickly obtained microfinance through various grants. And then they started developing. But when the corona crisis put an end to the experiments, which were reserved for the premises of the now closed university, they had to think of alternatives to keep the dream alive.

‘ “Even though the University of Copenhagen was closed, our sensors could still be used, so we started measuring fermentation processes instead of carbonation. At first it was for fun, just to keep us going, but then the results were so convincing that we kept going. Where before it was very focused on microbrewers, we ended up with a much bigger market, which is really everybody who works with fermentation,” Andersen explains.

Since the turn of the millennium, Denmark has gone from having 12 breweries to now having 216 and is currently the country with the most beer breweries per capita. It is estimated that there are over 20,000 home brewers in Denmark. Fermentation is a megatrend that is here to stay.

Getting ready for the market

Although the people behind Zymoscope have not yet officially launched their solution, they are currently running pilot projects with a number of Danish microbreweries – including Flying Couch, White labs and Empirical. The idea is to be able to go to market with the so-called Zymometer without the classic teething problems.

“We are still developing our product. Our algorithms and app are ready, the only thing we need is to finalise the hardware. The fermentation environment requires some very robust sensors that can handle both the humid gas and cleaning time after time – so it will still work in 10 years,” says the Zymoscope founder.

After a series of soft-funding grants, the Danish startup raised its first round of investment a year and a half ago, led by Rockstart and Vækstfonden, among others. And now they are getting ready for another round. The goal is first and foremost to bring the Zymometer to market. Then it will experiment with new products like kombucha, natural wine and fermented milk products.

“We definitely need a bigger in-house lab. So we can accelerate our development process and start developing our many ideas efficiently and independently of our otherwise close partners,” explains Mads Andersen.

When Zymoscope goes live with its analytical platform in a while, the main focus will initially be on the Nordic and Western European markets, where fermentation has (again) become a mega-hit.

The post Startup of the week: we’re one of the world’s most beer-brewing countries. New technology should make us one of the best appeared first on startupmafia.eu.