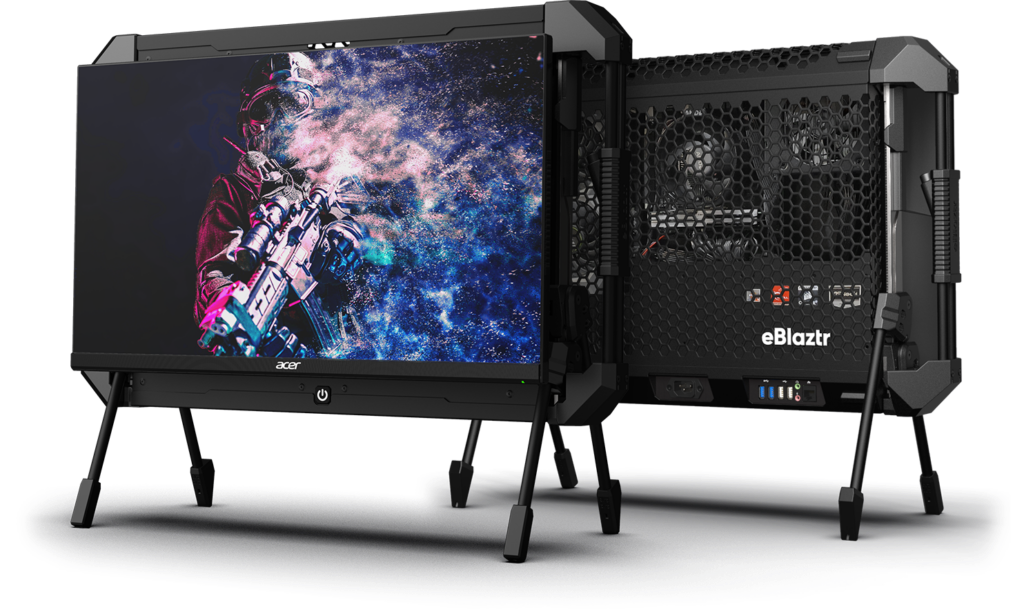 An expensive laptop that burnt out during heavy gaming has today become the startup eBlaztr, which aims to make real gamers more mobile.

The laptops boiled over when the group of friends met to game. Both the studio laptop and the dedicated gaming laptop. But the third of the friends had a desktop computer assembled from random parts he’d received in exchange for favours over the years – and that flea market computer just kept on going.

The story of the start-up eBlaztr starts as the tale of the three little pigs, and founder Jonan Bahnsen was the middle pig with the expensive gaming laptop that was blown away by too much gaming 10 years ago.

“There I see a need that is not being met: Why can’t my computer be both portable and good for gaming? I liked to physically play with friends,” he says.

Actually, in his early 20s he put gaming on the back burner, but 10 years later he found that the challenge still remained. A colleague dragged his entire desktop computer, including screen, on a train journey, and that made him realise the business potential and found the start-up eBlaztr: an all-in-one computer aimed at gamers on the move.

Caption: eBlaztr started out as a “towable” project, and when it came to naming it in earnest, the startup drew inspiration from both the ghetto blaster (a mobile sound system) and Quake’s hyperblaster: the all-out weapon that takes out everything in front of it.

Hacking into a corona market

From the start, Jonan Bahnsen showed that the key to untapped business potential lay in designing a special enclosure that could make desktop computers more mobile. From there, he reached out to business people, marketers and gamers to understand the challenge and find the right solution. And after a year of countless coffee meetings, visits to local esports clubs and 3D drawings, production began in early 2020. On a very small scale, with 3D printers and laser cutters. Then the first eBlaztr was put on sale – including screen and computer parts bought from various suppliers.

“We actually chose to sell complete computers to avoid the whole process of preparing by-laws to assemble and disassemble the system – we felt it was the easiest way to complete the first computers so we could get them to market and get them tested,” says Jonan Bahnsen.

The earlier prototype of Eblaztr, presented to esports organisations for feedback, compared to the final form.

Already the first version of the special computer was received with a storm, when the startup posted a video on Tiktok, which has since received 733,000 views. But the timing of the first sale was also rather unfortunate.

“The first time we put the finished eBlaztr on our table, one of my colleagues switched on a press conference in the background. So in the video where I walk around and film the first eBlaztr, Mette Frederiksen shuts the country down in the background,” says Jonan Bahnsen.

The Corona crisis led to huge chip shortages, which made it difficult for the small manufacturer to source parts for its computers. However, it managed to sell the first 50 computers, which confirmed that the design of the enclosure was right. At the same time, the start-up used the feedback to refine the design, which is now going into large-scale production.

With a background as a top player in World of Warcraft, Jonan Bahnsen has a good network in the gaming world, which has helped expose eBlaztr. However, when a review of the Danish, luggable gaming computer recently popped up on Linus Tech Tips – one of the biggest influencers in computer parts and gadgets – it wasn’t a favour, but a result of dogged work.

“I had written on my bucket list that he should review it. So I went on their Reddit, and posted a picture of our product with the question ‘How do I get this to Linus – and how do I make sure he doesn’t drop it?’ Because he tends to do that with everything. And it made the thread go so crazy that our webshop crashed because there was too much traffic,” says Jonan Bahnsen.

The buzz also reached the editorial team at Linus Tech Tips, who wanted to test computers. And the start-up seized the opportunity immediately – in a way that allowed them to address some of the potential customers’ questions about the new computer form, and at the same time turn the attention into pre-orders.

Will take over the big niche

Compared to a regular laptop, the eBlaztr is still a big and heavy computer. But the goal of the startup is not to replace the laptop either. It’s to target gamers on the go, who today either spend a lot of money on a gaming laptop that doesn’t last, or lug around an even bigger desktop.

“We’re not a product exclusively for gamers going to LAN parties. The biggest need is actually with new dads who don’t have the altar space with a gaming chair and a big desktop. There we come with is a solution that can help the generation of gamers who are becoming adults,” says Jonan Bahnsen, and adds that they are also experiencing interest from, among others, young people at secondary school and high schools, who need a powerful and mobile computer.

So Eblaztr is aiming for a niche, but a big niche. And with a patented design as well as the promise of a more durable gamer computer where parts can be repaired or upgraded on an ongoing basis, pre-orders are starting to tick in. The startup expects to sell 5,000 units in its first year. And that’s just the beginning, because they’re already talking to investors and manufacturers about the ultimate step:

“We’ve tested the concept and got the teething problems ironed out, so we’re ready for large scale. And we’re going to scale up with big production.”

EBlaztr is bootstrapped so far, but is currently looking for investors for large-scale production.

The post Startup of the Week: “We plan to kill the portable gaming computer” first appeared on startupmafia.eu.