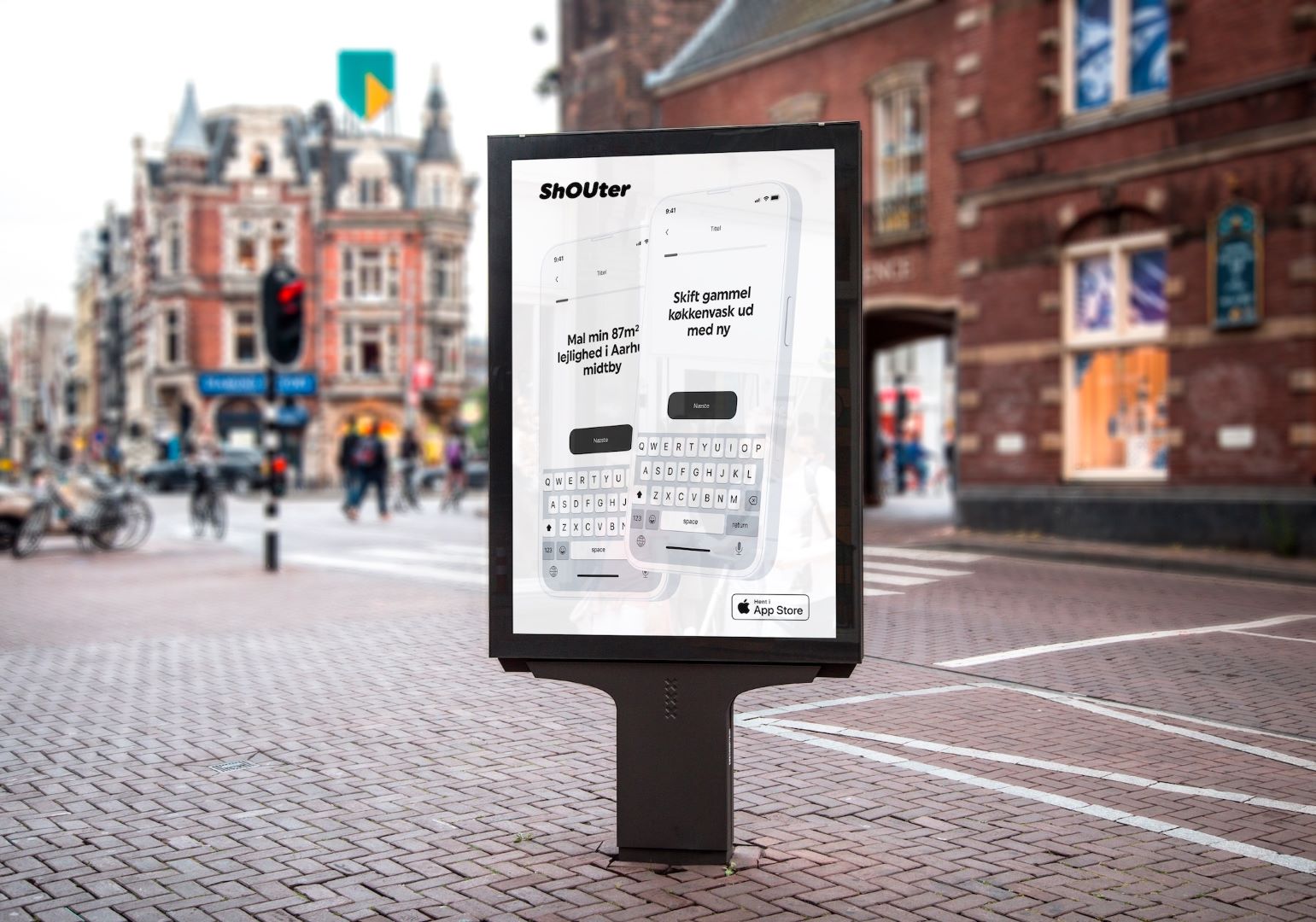 Many have tried and many have failed. Yet a young startup is trying to create the next tech sensation with an all-in-one marketplace for hands-on tasks – and the team already has a number of prominent investors behind it.

Today, whether you want junk food delivered, your house cleaned or a quote for a new roof, it’s just an app away. Or maybe more accurately, three apps away. Because so far, the marketplaces have largely sprung up in their own niches. But young startup Shouter wants to change that with an all-in-one solution.

“We’re a year-and-a-half-old startup with a Jutlandian philosophy about changing the way we get things done in everyday life. It sucks that in the 21st century you have to call around to get shelves hung or grass mowed. With us, you can ‘shoute’ your task into a digital universe, attach details and only be introduced to interested, qualified and local people who can fix it and help you further,” explains Simon Cederholm, CEO and co-founder of Shouter.

So far, users can get jobs done by a mix of around 1,000 suppliers in everything from photography to DIY.

To date, Shouter has solved tasks worth more than DKK 1 million in the Aarhus area. The mission, however, is much bigger: Shouter will be a brand that all households in major European cities know as the way to get fast help, whatever the task.

Shouter has to date landed investments of DKK 3 million from a number of prominent investors, foundations and former entrepreneurs – including Mikal Hallstrup (founder of Designit), Christian Rasmussen and Cathrine W. Andersen (Roger.io) and Anders Boelskifte and Christian Schwarz Lausten (Founderment/Gaest.com/Landfolk). VF Ventures and the Innovation Fund have also invested millions in the start-up.

New player in a graveyard

Many have tried an all-in-one marketplace – and many have failed. So far, the path to a sustainable marketplace has been to focus on defined niches. That’s why Shouter also started with a manual and very handheld version of the platform to explore whether the time was ripe for a unified marketplace for all kinds of practical tasks.

“The first year we didn’t build tech. We deliberately did it manually to test the potential. So we just had a website. Here you went in and wrote what you needed done – and then we sat internally in the back office and called around to different ‘doers’ to match the user’s wants and needs with qualified people in our excel sheet,” says Simon Cederholm.

Nevertheless, in the first month, the company managed to turn over DKK 100,000 in small services by focusing exclusively on Aarhus. And that made the Shouter founders believe in timing. After one year of development, they now also have the technological solution ready to automatically match users with suppliers – including integrations with, among other things, NemID validation and insurance from Tryg.

The geographical focus is still limited to Aarhus, however, because it is important for Shouter to become strong here before they spread the concept.

“When you just want to get out there and scale the good stuff, it’s tempting to open up all the doors. Maybe there’s someone in Copenhagen or Stockholm who wants to ‘shoute’ and get a job done, but for now that will have to wait. Our priority is to sacrifice quick revenue opportunities in order to focus on scaling locally, gaining significant data in Aarhus and, on that basis, creating duplicable growth in new cities,” says Simon Cederholm.

Will cost many millions

Shouter has a thesis that their solution is broad enough in a given city once they have solved 1000 tasks for their users. And it is precisely the breadth of tasks that is crucial to making Shouter a fast-growing business, the co-founder believes:

“Those who have tried to do it in the past have predominantly focused on certain niches and have gone deep into various verticals. It’s turned out to be fragmented. We want to introduce our users to local professionals who can help with x, y and z in categories that complement each other. Like a Wolt-meets-Airbnb inspired interface, but where Shouter offers a wide range of services in what we need time, help and profit to get done,” says Simon Cederholm.

Overall, the 22-year-old co-founder and his team see volume as the overriding success factor. Both in the bandwidth of tasks and geographically. So even though the first real version of the platform has only just been launched in Aarhus, they are already looking towards Copenhagen. After that, Berlin, Amsterdam, Stockholm and Brussels could be in their sights. An operation to be executed with the help of foreign investment funds, which is why the company is also planning to raise another 10-15 million investment crowns for growth in new cities.

“It’s going to take us years to create the traction that makes it really exciting. It requires volume and takes time to build. We therefore need extra fuel to shoot the shortcut. More money needs to be raised. It’s expensive to build a category killer and become category leaders in the future labour market, but we are confident and also humble about the task,” says Simon Cederholm.

“The timing of the marketplace makes sense now, because people want to work more independently. People wouldn’t have done that five years ago,” says Simon Cederholm. And with a combination of a focus on individual, local markets and a fierce growth strategy driven by investor dollars, the founders are betting on reaching crucial volume in the marketplace.

Shouter is following in the footsteps of a gig economy trend and a more independent workforce, but Simon Cederholm also believes the young startup is taking the trend a step further. With them, you can’t just get a pizza delivered that you could actually just pick up yourself. You can get tasks done that you really couldn’t have done yourself – for example, one user is having a new shoe rack built by a local carpenter at the time of writing.

That’s why he hopes the platform will encourage more entrepreneurship from new quarters, because the platform’s ‘do’ers’ can make money doing what they do best.

“Digital creators already have great platforms like Worksome where they can check themselves into the gig economy. But when we talk about the future of work, many forget about the artisans – the ones we increasingly opt for because we either can’t do the job ourselves, or because we consciously choose to prioritise our time differently. And that’s the clientele we’re talking to,” says Simon Cederholm.

Whether you’re a digital creative or a craftsman, you’re not necessarily very good at marketing, bookkeeping or outreach. And that’s where Shouter wants to help its suppliers, just as similar freelancer platforms help the digital workforce – so artisans can also run their businesses through the app on a gig basis and focus on earning more from what they’re good at.

We have a humble ambition to create more self-employed people in Denmark – and the more skilled as well as unskilled people we can help on their way and dress the techsavvy, the better,” says Simon Cederholm.

The post Startup of the Week: Shouter will take Europe by storm with an idea most have failed with appeared first on startupmafia.eu.