If you compare global clothing production to a dirty floor, Trine Young has set about cleaning up the mess: Every year, more than 100 billion garments are produced globally, but a third are never sold and end up in landfills, for example.

“When you start vacuuming where it’s dirtiest, you can also quickly see where you’ve been. It’s in the overproduction that the most can be fixed, because there are many links in the process that can be cut or made more sustainable,” says Trine Young, founder and CEO of Rodinia Generation.

Rodinia Generation wants to get rid of overproduction by producing only what is needed. This will be done through so-called micro factories, which are connected to intelligent software. The microfactories take up no more than a shipping container and consist of five machines that together can dye and put prints on white fabric and make the patterns of the clothes.

“The software tells the microfactory how many blouses to produce, for example, what colours and prints the blouses should have, and how the patterns should be placed on the fabric to minimise waste,” says Trine Young, adding that the microfactories can produce up to 90 per cent of the different styles in a given collection.

The white fabric is loaded onto the machine and then given colours and prints.

Then the machine goes to work producing the blouses. The all-white fabric is put into the microfabricator, and then the colours and prints are placed exactly where the patterns are cut out. No water or chemicals are used. Once the cut-out pieces are produced, a seamstress sews them together to make the finished blouse.

Trine Young graduated as a clothing designer from the Danish Design School, and subsequently completed a Masters in Design and Technology from the London College of Fashion.

“I’ve always thought in terms of systems and processes, and design for me has always been about thinking several components together. The process is just as important as the product itself,” says Trine Young.

The path to a more tech-oriented career began at the Danish Design School, where Trine Young made great use of her inventive mentality and ability to think systematically.

“Somewhat atypically, I designed a system for recycling polyester instead of designing a nice spring collection. It wasn’t very popular at the time,” says Trine Young.

Micro factories around the world

Rodinia Generation’s vision is to have microfactories all over the world. So when a customer places an order with a clothing manufacturer, the software sends it to the microfactory closest to the customer.

“Rodinia Generation will produce the clothes where the demand is. Right now, much of the clothing is produced on the other side of the world – usually in Asia – and then takes up to nine months to get to consumers. Our method can make that more efficient,” says Trine Young.

If the system is located directly next to the microfactories, production time can be reduced to 48 hours. For fashion companies, this means much more efficient production, which can largely be adapted to customers’ increasing or decreasing demand for specific products. 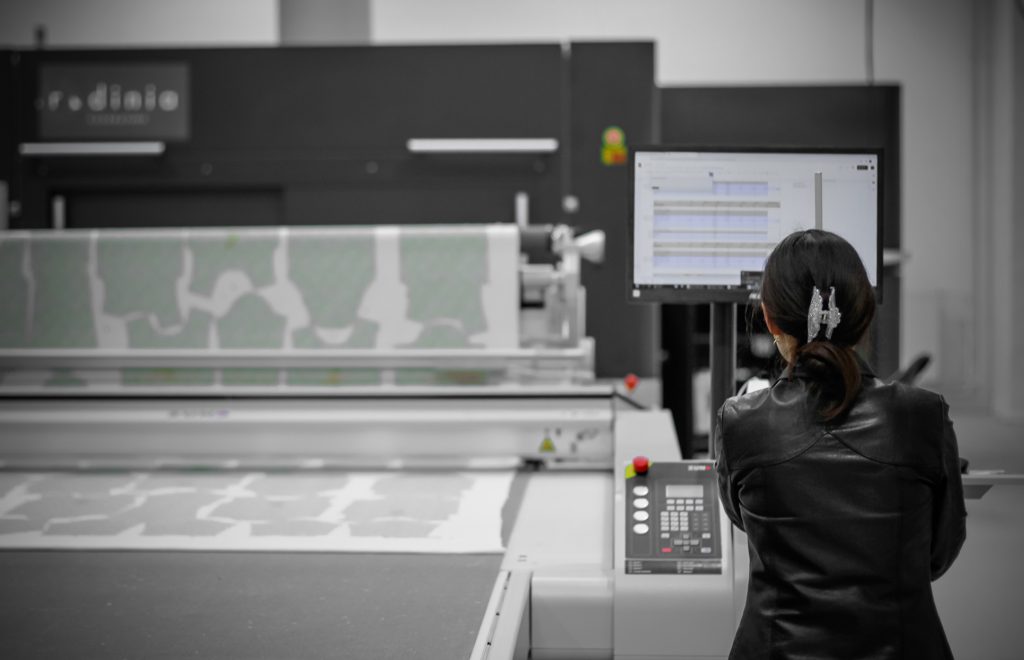 The patterns have been printed on the white fabric.

At the same time, less clothing needs to be produced before a company’s production is cost-effective. Micro-factories are cost-effective down to the individual garment, and therefore a fashion company does not have to place a large order for several thousand units that they do not really know if they will sell.

At present, Rodinia Generation is well two-thirds through the process of completing a scalable microfactory. The ambition is to launch the first factories outside Denmark within two years.

However, the start-up is already working with six pilot customers who are having their clothes produced in the start-up’s microfactory in Copenhagen NV. However, production time is not yet down to 48 hours, as the system is located in Lithuania.

“We have learned a lot from working with our pilot customers. The data we get helps to improve the system – both the software and the physical process,” says Trine Young.

That’s why Rodinia Generation’s next step is to work more closely with the machine manufacturer to jointly bring the microfactories to the world.

“We need to roll out microfactories globally and make it a democratised technology, in the sense that as many people as possible should benefit from being able to produce clothes in a fast and sustainable way,” says Trine Young.

Rodinia Generation has received funding from the Innovation Fund, the EU Innovation Pool and private investors from both Denmark and abroad. 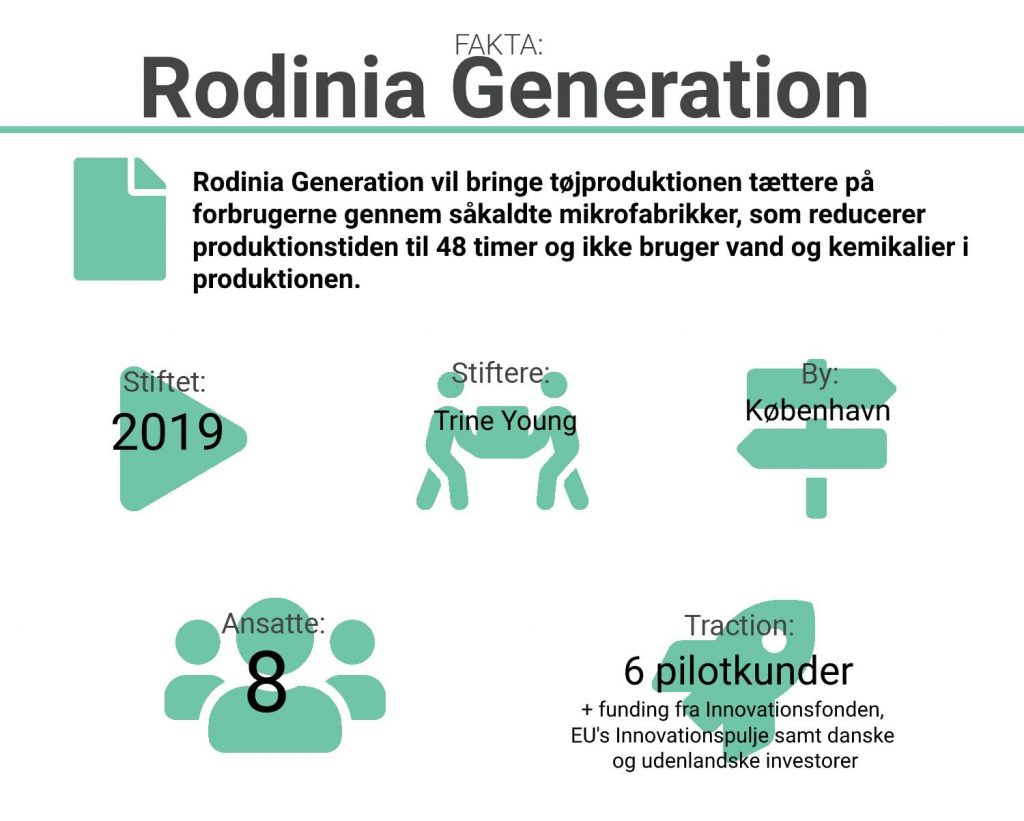 The post Startup of the week: Rodinia Generation will clean up the fashion industry’s overproduction appeared first on startupmafia.eu.