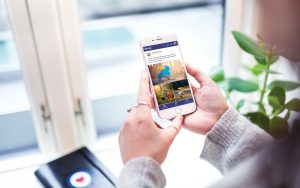 Play agreements. Excursions. Staff salaries. Invoices. With the Famly platform, daycare centres across Europe spend less time on administration and more time with their children. And even if the company can’t break into the Danish market, a fresh mega-investment now points towards the US and a dream of becoming a global winner.

If you’ve ever stepped into the wolf’s den of a SFO or day care centre, you know how chaotic it can sometimes seem. Running and noisy children wearing flight suits and socks, blue tubs of strawberry jam placed disturbingly close to every table edge and an overloaded staff both dealing with stressed parents and making sure the beads don’t burn over in the corner.

But maybe it doesn’t have to be that way.

At least not if Danish start-up Famly has its way. Since 2013, the company has been behind an administration platform; an app where daycare centres can manage and coordinate daily operations, just as parents can follow their child’s daily life through pictures, messages and news about activities.

It’s all about streamlining the administrative work of institutions, such as invoicing, payments, coordination and scheduling, so that educators and staff can spend as much time as possible with the children, says one of the founders.

“There is a lot of administration involved in running an institution. That’s why we’ve simplified all the demanding aspects, so the institution can manage all operations through one platform. This means that we actually have an ambition that educators and staff with our solution can spend as much time with the children as possible and as little time on Famly as possible,” says Anders Laustsen with a twinkle in his eye.

The app also improves the connection between home and the institution.

“As a parent, it can be difficult to keep up with outings, events and activities through a piece of paper or a notice board, but on the Famly app they can communicate and coordinate birthdays with each other, while educators can share great photos, updates and generally show what the day has offered for the children. It’s as much about creating a respect and understanding for the work of staff,” explains the entrepreneur.

For parents, the app acts as a kind of social media with a feed of photos, updates and information. At the same time, play dates and birthdays can be coordinated through the platform.

Always dreamed of being an entrepreneur

Famly was not the first project that the two founders, Anders Laustsen and Henrik Møller Rasmussen, worked on together. They had an idea to start something together for a long time.

“We know each other all the way back from primary school. I always thought I would be an entrepreneur, and when I started working with Henrik in another company, the idea of an app that brought family life together came up.”

“But the idea actually came after Henrik’s (Møller Rasmussen, ed.) daughter started kindergarten. When he saw how communication was done through notice boards and curling paper notes back and forth, we thought it must be possible to do it smarter,” Anders Laustsen describes the start-up.

In 2013, this led to the Famly company, which the two entrepreneurs ran, developed and boosted together in the early years. It was important to validate the concept and show the market that users were willing to pay for the product before investors came on board.

“Henrik and I both have experience coding and building products, so that part was straightforward. But we wanted to confirm with satisfied customers and institutions that the concept was actually worth something – and not just a fun little hobby project. It was a way to make sure we would go with this idea,” Laustsen says.

After the first two years with Famly, the entrepreneurs had amassed plenty of both customers and satisfied institutions. Now it was about raising money for the next step in the journey.

As it turned out, Famly’s mission and solution resonated. As a result, a number of angel investors bought into the start-up, including prominent names such as Morten Primdahl and Alexander Aghassipour, both co-founders of Zendesk, Klaus Nyengaard, former CEO of Just-Eat and Christian Birk, co-founder of Endomondo.

Since then, things have gone fast. Today, the company has 107 employees and offices in Copenhagen, Berlin and a new office in Washington DC. Over 3,500 institutions across mainly Europe and over 450,000 parents use the app. And the co-founder has no doubt about the journey the company is on.

“We’re going to take over the world,” Anders Laustsen says bombastically with a grin.

But despite Danish founders and a Danish corporate DNA, Denmark is not a focus area for development. There are too few private institutions, and since the public sector has made a 10-year deal with rival platform Aula, the focus is on Germany and the UK, among others, where Famly is enjoying great success.

The startup has just raised an investment of almost 120 million euros from the US venture capital fund Susquehanna Growth Equity with a view to conquering the US market. While there are only a few hundred private institutions in the US, there are over 100,000.

“We have a good foothold in Europe, but the US is where we have the biggest competitors. So to really take on the competition, with this new investment we need to see if we can establish ourselves across the Atlantic. We are determined to become the global winner in this area,” says the Famly founder of his ambitions.

The post Startup of the week: Famly has developed an app you’d rather not spend time on appeared first on startupmafia.eu.