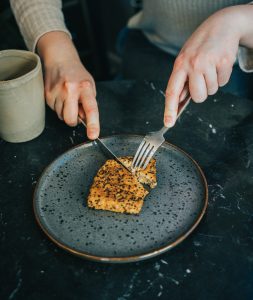 Eating climate-friendly alternatives must never become a competition to mimic meat as much as possible, says start-up Tempty Foods. With a sea of start-up awards and competitions behind them, they are getting ready to roll out a innovative mushroom-based meat alternative invented at DTU general consumers.

As the pandemic raged and the shutdown was almost hermetic, many students had to go without some of the things they were sure to value most about student life. And which the virus stole overnight. That meant cancelled rest breaks and goodbyes to physical lectures. Not to mention Friday bars or just being with the people you studied with.

But a few managed to turn the situation into something positive. For in February 2021, while the corona crisis was still haunting, Ana Pejic, Cecilie Engvang Lund and Martina Lokajová met virtually through an innovation course at DTU. And before a week had passed, they were working on what has now become Tempty Foods – a food startup producing sustainable meat alternatives from DTU’s Skylab in Lyngby.

“We are quite different in terms of skills and as people, so it was a huge advantage to start out virtually. In fact, for physical training, we tend to go with people who are similar to ourselves. Even though we lived only 10 km apart, it took a whole month before we met physically. And by then we were well into the project and had become part of an accelerator programme,” says Cecilie Engvang Lund, co-founder and CTO of Tempty Foods.

During the first week of the course, students each had to pitch a new product. And the three entrepreneurs quickly came together to use mycelium, networks of protein-rich roots under mushrooms, as the base of a new meat alternative. A month later, they were well into an accelerator course – and still hadn’t looked each other in the eye. Physically, anyway.

“When mushrooms grow in nature, their entire underground root network (mycelium) is actually hugely nutritious. And that’s what we use to make a meat alternative that perhaps most resembles tofu. But – according to us – has a much better taste, texture and is also much better for the climate,” explains the entrepreneur.

In large containers, the mycelium is developed by supplying all the nutrients the root network needs to grow through fermentation. This requires far fewer resources and space than, for example, minced beef (40 times less CO2), pork (three times less CO2) and tofu (two times less CO2). The Danish company mixes the mycelium with quinoa, carrots and spices.

Not a substitute for meat

But while the most obvious emissions comparisons are with beef and pork, the DTU start-up does not see its product as a meat alternative. At least not in the literal sense. Instead, they are more keen to create a whole new food category that can complement the supply of vegetarian and climate-friendly protein sources.

“If you set up the product to look like meat, you can almost only fail. Because either you make something that doesn’t taste like meat at all, or it’s full of additives. Instead, we’re trying to create a new category, a high-protein ingredient,” says Cecilie Engvang Lund.

Tempty Foods products are not only resource-friendly but also nutritious: they are rich in protein and high in essential amino acids, fibre, zinc and vitamin D. But that’s not the only reason why the mushroom root network is an obvious choice for making food.

“In addition to all the obvious qualities, mycelium has a really good texture. It’s easy to work with, unlike tofu, for example, which I still can’t figure out how to cook myself without it getting completely dry,” laughs Engvang Lund.

Since February 2022, things have moved fast. Tempty Foods has already won a host of awards including DTU Skylab Ignite Spring 2021, Ecotrophelia Europe and DTU Student startup of the year 2022 and received grants from Innofounder, Mikrolegat and Skylab Funding.

This has resulted in a total softfunding of almost 1.5 million DKK. Currently, Tempty Foods sells their products to other food companies – restaurants, canteens and meal boxes, for example. And this is a completely deliberate strategy.

“Right now, as a general consumer, you can only sign up for our product on our website. Initially, we are targeting cafés, restaurants and meal boxes, so that the consumer receives our meat alternative as part of a well-composed and good meal experience, which they can recognise when we release it in the grocery store,” describes the Tempty Foods founder.

But the ambitions extend far beyond the Danish B2B market, where the DTU start-up is currently primarily making its presence felt.

“Our vision is to create as much positive change as possible. And for that reason, our aim is global. So right now we are looking towards a possible investment round at the end of the year,” Cecilie Engvang Lund says about the future.

According to the people behind Tempty Foods, one of the strengths of the company is that the product is not exclusively aimed at one target group, but is more linked to the direction in which a large part of the world’s society is moving right now.

“I don’t see everyone stopping eating meat. Instead, we will increasingly see the low-price categories being phased out and quality taking on a greater role. That’s why we’re appealing not just to vegetarians and vegans, but to everyone who wants a climate-conscious lifestyle. And that market is growing fast as more and more people shop to keep having a planet,” says Cecilie Engvang Lund.

The post Startup of the week: under lockdown, DTU company invents new food that could revolutionise climate fight appeared first on startupmafia.eu.