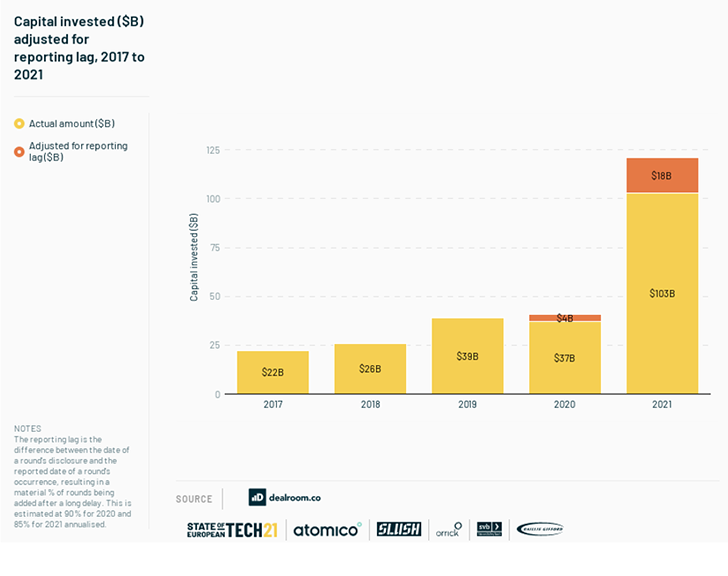 The performance of startups on the Old Continent in 2021 was explosive and – subject to the evolution of the pandemic – is expected to register new records in 2022. In 2021 alone, European startups “raised” $121 billion, triple the amount of just $41 billion in 2020 and ten times more than in 2015.

The total value of startups in Europe, listed and unlisted,exceeded $3 trillionfor the first time in 2021

Note that it took decades for the ecosystem value to reach $1 trillion in December 2018.

However, since then the trajectory has been truly explosive. In fact, $1 trillion was added in the first 8 months alone in 2021. “What the numbers tell us is that the European high-tech sector is generating returns for investors faster than ever before,” says Atomico’s latest annual State of European Tech Report.

Another indicator of the dynamism of the ecosystem is the rate of creation of new startups with a value of more than $1 billion, the so-called “unicorns”. In Europe in just one year 98 unicorns were born, bringing the total number to 321 from 223 at the end of 2020.

In practice, Europe is producing unicorns at a faster rate than ever before with the UK remaining the undisputed leader in unicorn production, hosting 100 companies of this profile.

In 2021 unicorns were created in 28 different countries across Europe. Latvia and Cyprus are the most recent additions to this list. But the “herd” of decacorns – startups valued at more than $10 billion – also doubled in size in 2021: 26 European companies now hold this title.

One extremely interesting and highly encouraging ecosystem finding of the Atomico report is that funding for early-stage startups in Europe is now on par with that of the US. European startups absorb 33% of all capital invested globally in funding cycles of up to $5 million, compared to 35% for the US.

“Funding in the early stages of a startup’s lifecycle is a key indicator of future growth and therefore this finding is a harbinger of positive developments for the ecosystem,” the analysis says.

Energy: scaled subsidy of €42 for the first 300 kilowatt-hours in electricity and €40 in gas

Vangelis Marinakis: He put 32 tankers in the Heidmar joint venture

Karagiannis: These are the investment priorities of the Olympia Group