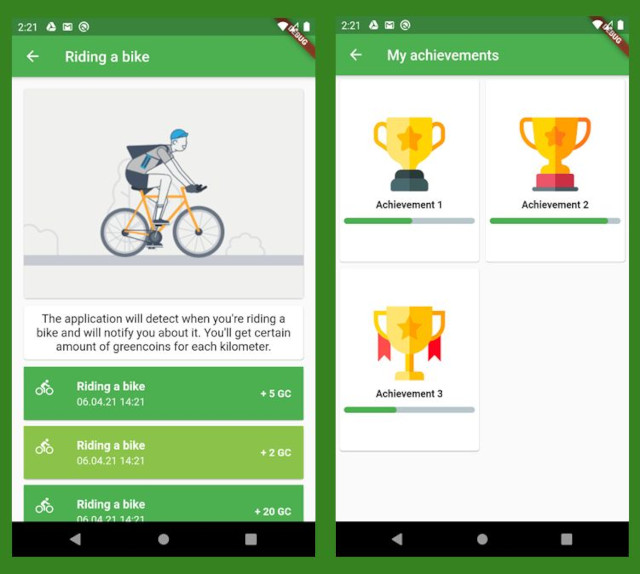 “It quickly became apparent that there was no shortage of sustainable technologies in the world. However, the dissonance between the state of technology and the reality around us was felt. Cities evolve slowly, and in the dominant economic model, ecology is not a real value. The problem of modern cities is not in the lack of green solutions and technologies. The problem lies in their availability to citizens and the lack of incentives to change their behavior” – these conclusions were drawn by the leaders of the Greencoin project during the international workshop IdeaLab (Cities for the Future) financed by the EEA Financial Mechanism and the Norwegian Financial Mechanism. The workshop was attended by scientists, government, business and NGO representatives. Among them a group of six people developed a surprising idea to encourage city dwellers to change their lifestyle to a more environmentally friendly one – earning green money for green actions. As a place to test the idea they chose Gdańsk, where until 2023 Greencoin will be tested – a virtual currency supporting the change of everyday behavior of city residents to a more ecological one.

Recent statistics show that Poles are increasingly aware of the dire situation in which our environment is and that man is responsible for its condition. We also declare a greater willingness to take ecological action, but surrounded from all sides by consumerist stimuli (buy more! two for the price of one!) and influenced by deeply rooted habits coming from the inside (it’s more comfortable by car! why bother riding a bike?), we do not have enough determination to take real action.

And this is where the Greencoin consortium meets our needs – with the help of virtual currency they want to support our internal motivation, to better mobilize us to change. A team of scientists and activists from Gdansk University of Technology, Warsaw School of Economics, Academy of Special Education, Oslo Metropolitan University, Stavanger University and the City Initiative Association led by Kacper Radziszewski, M.Sc. Kacper Radziszewski, M.Sc. from the Faculty of Architecture, Gdansk University of Technology.

Reward instead of punishment

– Nowadays we live in a society where everything is based on some of our negative behaviors, e.g. if you park your car in the wrong place or drive at a prohibited speed, you will be punished. But how about being praised for desirable behaviors? – said Dr. Ari Tarigan of the University of Stavanger, one of its co-developers. Based on the idea that a well-designed reward can work better than a punishment, the creators are preparing a payment for those who make an effort and implement changes in their lives that are good for the environment. The idea is simplified in the graphic below:

The challenge is for the unconvinced. This application is for them

Małgorzata Romanowska from Stowarzyszenie Inicjatywa Miasto (City Initiative Association), initiator of the Greencoin project, explains how the concept of green currency evolved based on research conducted since the spring of last year: – In our project, the environmental footprint will not be, as it was the initial assumption of the project, the primary indicator of token allocation, but rather the resultant of what people value and the environmental footprint. The change in our approach is due to the results of our research, which we conduct among the residents of Gdansk before the introduction of green tokens in the city.

Now we see that we need to create something that will interest and attract a larger group of people, not just a narrow group of eco-enthusiasts. What we will offer the people of Gdansk, it will certainly be ecological services and products. And although the impact on the environment will be important for us, it will not be the priority of our actions in the testing phase – we want to attract and change people’s way of thinking, to show that together their actions make sense, that they create a community which, step by step, makes real changes. And our tokens will be a mutual reward for efforts, an alternative means of payment, thanks to which there will always be at least one winner – the environment.

Why reward with a token and not with a zloty?

How will the system using tokens be better? – I ask Małgorzata Romanowska, who, in response to my question, shows that such a system of rewarding is already widespread around the world: – The concept of alternative currencies grew out of the feeling that the economy built on the values we have now does not work. This is an issue raised not only from the bottom up anymore, but also by international institutions – the idea that we need currencies that correspond to values that don’t destroy our planet. By using alternative currencies, we can reward in a different, sustainable way and thus support alternative values. Alternative currency is an idea that has been proven time and time again – there are now several thousand such projects in operation around the world, including those focused on ecological activities.

Małgorzata Romanowska also shows me, using examples, the advantage of tokens over rewards calculated in traditional currency: – We are introducing our token system to build internal motivation among Gdansk citizens to change their lifestyle for a more eco-friendly one through external incentives. We do it also to show that although environmental protection is a value in itself, it can be combined with e.g. saving money. It is worth noting that by reducing water or electricity consumption, choosing public transport or carsharing, not only the environment gains but also our wallets. However, we must remember that we are treading on thin ice. Psychological research shows that extrinsic motivation – such as material rewards or cash – weakens intrinsic motivation, which is more lasting and stronger. This is why the “rewards” we will offer in our system will be closely linked to the positive impact of residents’ actions on the environment. They will be in themselves a long-term support for changing attitudes – shaping people for whom the environment is important.

The activist from Inicjatywa Miasto Association knows that the application has a chance of success among the people of Gdańsk only if the prizes for the activities are attractive and the choice is wide. That is why she invites all environmentally-oriented startups to join the initiative, showing the benefits of such a step for companies: – We encourage startups to join our project, we have already established contacts with several entities. Your products/services will appear on our “eco-initiative map” of Gdansk, making you more visible to your customers. In Poland there are many startups focused on environmental protection, but it’s hard for them, because of small resources, to break through to the consciousness of a larger group of society. It seems to me that there is a need for a force that would show the multitude of such solutions and I think that Greencoin can be a binder for this type of community. I also see that many eco-startups are using a points system in their solutions, which is similar to our idea of green currency. So why not join our forces, creating common tokens, which will give much more possibilities?

Małgorzata Romanowska shows yet another potential benefit for startups that will engage in the Gdańsk Greencoin project: – We are a research project – our goal is to see if it will work, not to ultimately implement the application. But once the project is finished, we want to put our idea into practice: our application, our solution goes open source and this multiplies the possibilities of scenarios. For example, if we work well with a company in the test phase and the entrepreneur finds out that he is interested in the application, he can develop it further himself, additionally being richer in the knowledge that the developers have given him. On the other hand, we as a team know the application and how to implement it, so we can cooperate with another city and help to implement our application to the local authorities. We want our green currency to be a project that unites environmentally focused cities in Poland.

Greencoin is of course not the first idea in the world to use an alternative currency for social/environmental purposes. Here are some examples of such initiatives from different countries on our continent.

A Ukrainian application that for several years now has been motivating city dwellers (as well as schools) for positive, pro-environmental actions in exchange for discounts on products and services from eco-conscious companies. These companies, in turn, can use the ClimateDrops collected in this way to strengthen their eco-image (by deducting ClimateDrops from their carbon footprint), use them as discounts at other eco-friendly companies, or even sell them to companies that want to improve their image in this way. ClimateDrops is very similar to Greencoin in its mechanism of engagement, which makes it all the more likely that it will be successful in Poland. The results of one of the flagship projects carried out using ClimateDrops were presented during the UNFCCC COP24 summit in Katowice. With the added motivation derived from ClimateDrops rewards, students from 55 Ukrainian schools reduced their carbon footprint by 363 tons of carbon dioxide.

Introduced in the Belgian city of Ghent (Ghent), it can definitely be considered a success as it has been accompanying the residents of this city for eleven years! The principle is simple – you do some work for the benefit of your neighbourhood (plant flowers by your block of flats, arrange a green recreation area on the roof of your building), and in return you receive a payment in the form of torekes. Torekes are convertible into euros (1 torece is 10 eurocents) and can be used to buy real products in local stores (toys, food, etc.). The currency was introduced to solve local problems: poverty, labour market exclusion, and devastation of public spaces.

The Bristol pound has established itself in this British city as well as the tokens in Belgium’s Ghent or ClimateDrops in Ukraine. However, a local currency instead of the British pound has a completely different purpose than torekes and climatedrops (which, by the way, perfectly shows the potential of alternative currencies, the endless possibilities of their applications!). Bristolians were all about supporting the local economy, local businesses. They saw that too much of the money they were spending in international chain stores was leaving the city. With the Bristol pound, more money stays in the city – it encourages people to buy from local, small retailers, while boosting the city coffers (more revenue, more tax, more money to maintain roads, schools, etc.). There are 650 businesses and 2,000 residents involved in the system.