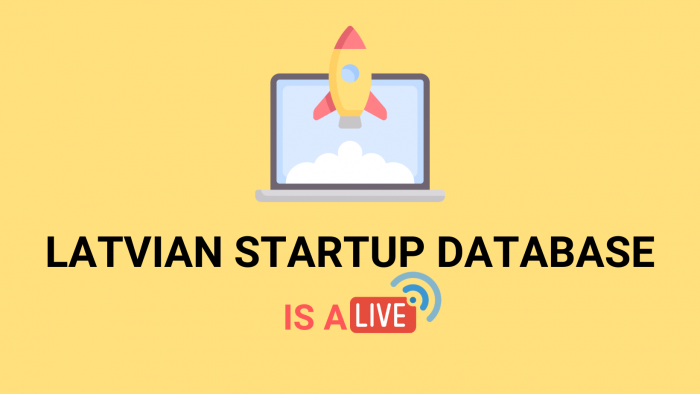 To promote the growth and development of the Latvian start-up ecosystem, the Latvian Start-up Database was launched on 17 June, marking an important stage in the development of the start-up environment. The creators of the idea are convinced that such a database will in future allow to measure the contribution of the sector to the country’s economy and prosperity.

The database project has been made possible thanks to the initiative and voluntary work of the members of the start-up ecosystem themselves. The ecosystem members themselves have been involved in the creation of this database and in the collection of data, and they hope that the further development of this database will be supported at national level.

The database currently covers most of the start-ups that have demonstrated their activity and development at least in the last 2 years. It contains information on the year of foundation, business model, sector of economic activity and amount of investment attracted, as well as information on turnover, number of employees and amount of taxes paid to the state, making it a concise and very valuable collection of start-ups. The database can be consulted at https://startin.lv/startup-database/

Such a database of start-ups is an important part of a well-developed ecosystem that will serve as a valuable source of information at both national and international level in the future. The information contained in the database will be accessible to everyone, but will be of particular value to the media, investors, potential partners and public authorities. The database will also allow to keep track of various changes and trends, planning the necessary support for the development of the start-up environment in Latvia.

“It is no secret that data is becoming increasingly important in today’s technological era. It is a great pleasure to see that the issue of data in the Latvian start-up environment has finally been addressed with a reliable, up-to-date solution. And it is especially gratifying that the project has been realised thanks to the initiative and voluntary work of the ecosystem members themselves,” says Toms Niparts, founder of the start-up Jeff App and member of the Startin.LV board.

Agnese Veckalne, Chief Operating Officer of Edurio and Board Member of Startin.LV, is similarly pleased, noting the great response from start-ups that have offered their help in developing the database. “With this database, we also wanted to show that it is possible to do something so significant with minimal resources, as long as there are passionate people willing to support the development of the ecosystem.”

“I have been following the Latvian startup environment for a long time and had noticed that there was no single database. So far, all attempts to create such a database have been unsuccessful. That is why I joined Startin.lv’s call to create it together with the resources of start-ups themselves,” says Jānis Grīslis, the founder of Snapio, who also helped to develop the database with his company’s resources.

“The launch of this database is a very happy occasion, especially now that Latvia is home to its first unicorn – Printful – and the whole world is looking at our startup ecosystem with even more interest. But it is especially important to maintain this database regularly, as information becomes outdated and obsolete very quickly. This is a big responsibility that the Latvian Startups Association is ready to take on and coordinate. We plan to update the information in the database on a quarterly basis,” says Olga Barreto-Goncalves, Executive Director of the Latvian Startups Association.

The next steps in the development of the database include extensive data collection on Latvian start-ups, expanding the types of data collected and integrating the database into the agenda of the responsible public authorities and other actors involved in the start-up ecosystem.