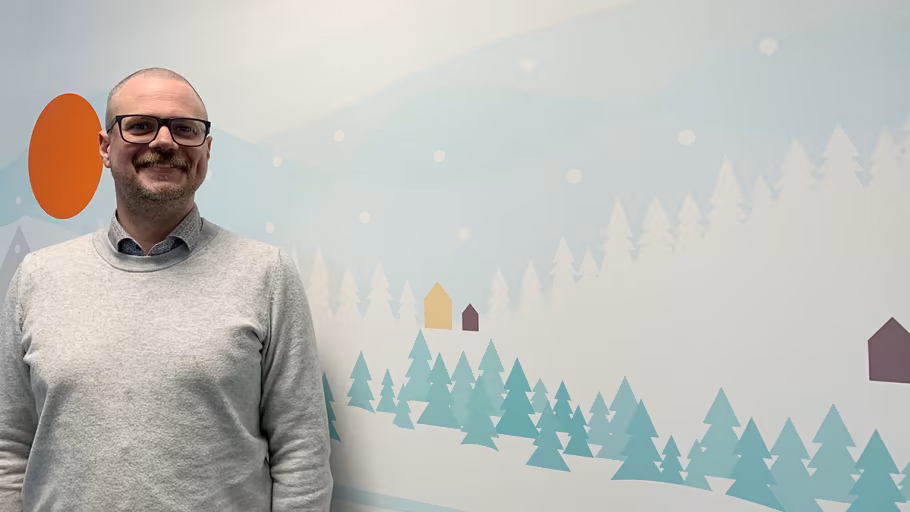 It’s the middle of an intense period when we meet Otto Andersson, branch manager at Sparbanken Nord’s Kiruna office.

The office is open for another 3 weeks before moving to the new centre.

– Yes, it’s very busy now, says Otto with a laugh. We’ve just got the new teller counter in place and the nice mural about our community involvement is starting to take shape and feels just right. It feels like a milestone – now it’s starting to look like it’s going to be a bank here.

Since April 1995, the bank has been housed in the premises on Lars Janssonsgatan. First as Sparbanken Sverige, then as Föreningssparbanken and Swedbank before the name became Sparbanken Nord in 2009. Otto took over the role of branch manager 1.5 years ago.

“It feels like a privilege to help build the bank’s new meeting place in the new Kiruna.”

– This is where we will meet our customers – both new and old – in the enormously exciting times we live in and have ahead of us,” Otto says and continues;

– Urban transformation, major investments in the mining industry, a growing space industry and, not least, the tourism industry with all the unique things our local area has to offer. It feels like a privilege to be involved in building the bank’s new meeting place in the new Kiruna,” he says.

Otto agrees that there is a lot to think about when a business like a bank is relocated. Everything from computer communications to coffee makers must work in the new place.

And at the same time, of course, the transition should go as smoothly as possible for all customers. The hours will be long, but Otto, Hasse, Kimberley, Lena and the rest of the team at the Kiruna office are positive and looking forward to their new workplace.

– Moving a bank is nothing compared to moving an entire city – so this should go very well,” concludes Otto, wishing everyone a warm welcome to the new premises on 16 May.