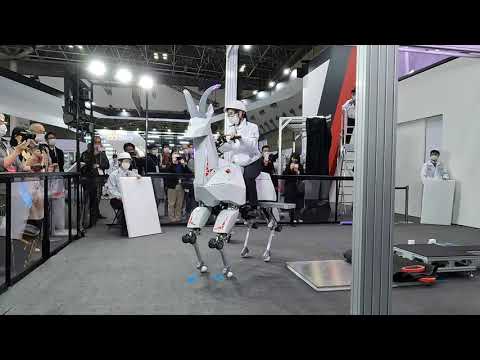 Kawasaki has unveiled an unusual robot at the International Robot Exhibition 2022 (iREX) in Tokyo. The project is called Ibex and is inspired by the anatomy of a mountain chamois. Because of this, it was quickly hailed as a robocar. Ibex can be “ridden” (the robot is equipped with a steering wheel and a seat) or carry loads of up to 100 kg.

However, the Robokose does not move particularly fast, but quite efficiently. Ibex features a hybrid way of moving – its knee joints can serve as wheels. In practice, it looks like the robot moves by both stepping and riding. Driving is preferred on planned and paved routes. Walking, on the other hand, is used in rough terrain.

The Ibex from Kawasaki can carry light loads, such as construction materials or crops. The Japanese indicate that another application could be, for example, inspection. Robokoza records images through cameras that can be viewed remotely. The robot from Kawasaki is basically supposed to be a competition for Boston Dynamics’ machines which are already used to carry loads.

Developing a design that will resemble a mountain chamois is a deliberate effort to make the machine more attractive and attract attention. De facto, there is no sensible, technical explanation for making the robot resemble a chamois.

However, it’s worth noting that the crazy look doesn’t end there, as the robot’s upper part from Kawasaki is completely modular. Thus, customers will be able to customize it according to their needs – even abandoning the animal design altogether.

Ibex is actually part of Kawasaki’s Kaleido program, which has been working since 2015 to introduce bipedal humanoid robots – modeled after Atlas from Boston Dynamics. At this point, it is worth mentioning the Polish project – Clone Incorporated, which wants to create an android that imitates human physiognomy. However, the startup is currently working on a bioprosthesis of the hand, which already moves basically like a human one.

Although this is still a long way off and it’s a bit of wishful thinking – perhaps in the future Clone Incorporated will stand next to Boston Dynamics and Kaleido Kawasaki, creating unusual robots that we will see on our streets, in our homes or factories.