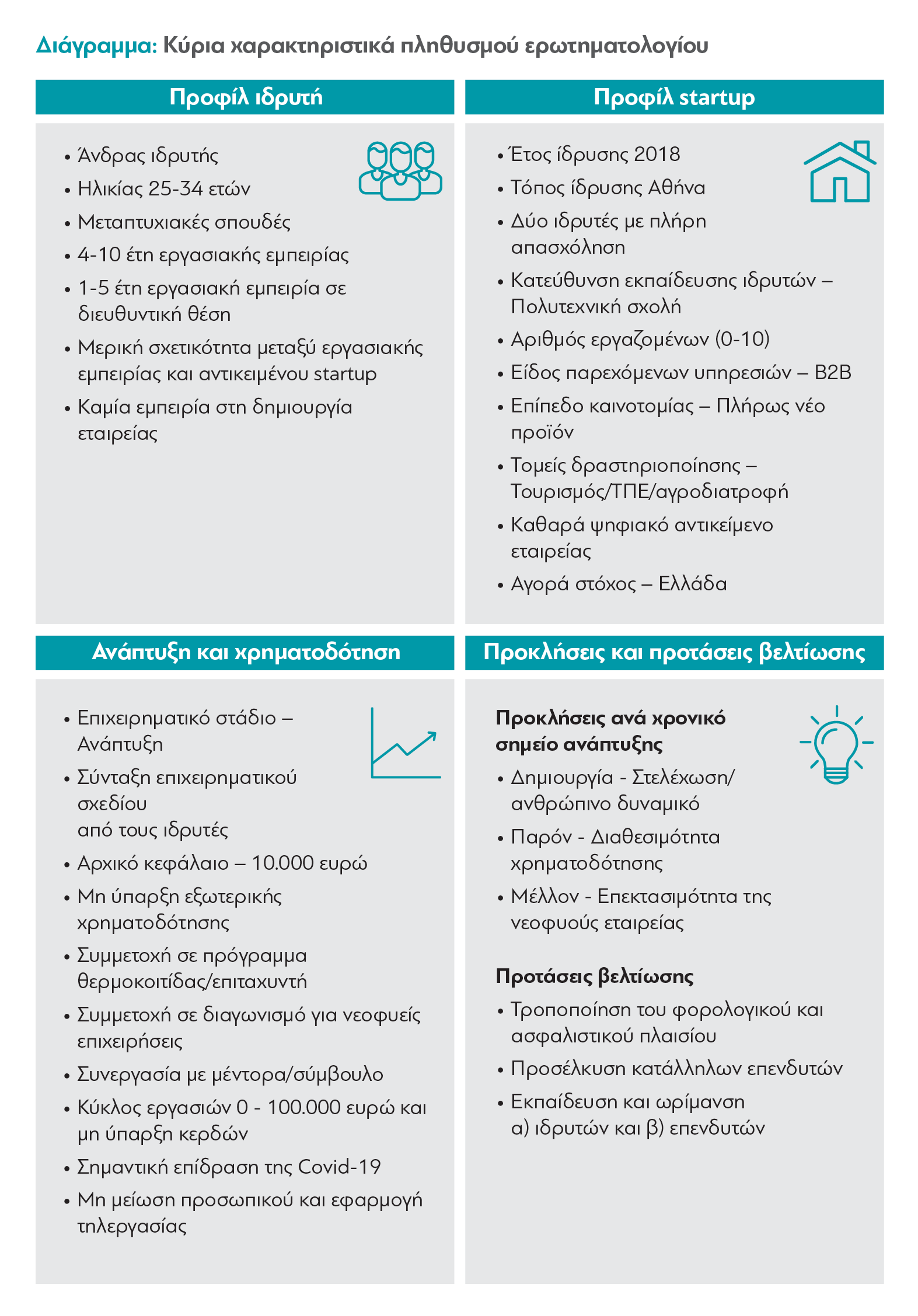 Start-ups, which are mainly active in the technology sector, started to receive a lot of publicity at the beginning of the last decade. On the one hand, the economic crisis led to the contraction or collapse of many traditional businesses in the country and left many Greeks looking for new employment options. On the other hand, technological changes were catalysing an increasing number of international markets and presenting a number of important opportunities. The great success stories of businesses around the world that “started in a garage” and quickly became gigantic, such as Google, shaped not only a business environment, but a wider culture, an “ecosystem”.

But how have startups in Greece evolved? The new research by diNeOsis, led by Ioanna-Sappho Pepelasi, Professor Emeritus at the Athens University of Economics and Business, and carried out by the consulting firm Octane, attempts to map Greek startups and the ecosystem that supports them.

The researchers consulted the literature, conducted 14 interviews with influential executives of the local market, while highlighting typical examples of other countries, isolating initiatives that Greece could adopt in order to further develop the market in a healthy way.

At the same time, they prepared a questionnaire to which 267 founders of such start-ups responded. In this way, useful information was gathered on the profile of these companies, their founders, the problems and risks they face and even the impact of the pandemic on their activities. Indeed, much of this information was not available until recently.

Among the start-up founders who responded to the survey, the vast majority – 8 out of 10 – are men, a disparity that is also observed in other European countries, which have, on average, a similar gender distribution. From an age perspective, the founders of startups are relatively young: 9 out of 10 are younger than 44, while more than 50% are younger than 34. They are also usually quite well educated: 48.7% have a master’s degree and 17.2% a PhD. Most report studying either at a polytechnic or business school. 68.2% have their startup as their full-time job.

In any case, a large proportion of the startup founders who responded to the survey – almost 4 out of 10 – said that their previous experience was in a job with “neutral to non-existent” relevance to the scope of their startup. Several of them, 22.5% of the total, say they have had at least one failed business attempt in the past. These are therefore entrepreneurs who took a significant risk: many had little or no prior experience, often in unrelated fields, while some “carried” the burden of one or more failed attempts.

It is also interesting to note the differences in the profile of the founders depending on whether they are active at home or abroad. As the researchers note, “the startupper who has founded and operates the company abroad has different characteristics from the one who operates in the Greek region”. The startup founder abroad is more often older (35-44 years old, compared to 25-34 years old), has more work experience (4-10 years vs. 0-3), but also more experience in managerial positions (1-5 years vs. 0-1).

The ‘geography’ of companies

Despite their small size, the start-ups appear to be clusters. 48.3% of the companies had two founders, 19.9% had three, while 13.9% had more than three. Only 18% had one founder. Almost 1 in 3 say they wrote their business plan together with a mentor. However, the majority of the founders’ teams are also male-dominated: 62.2% are made up of only men, while only 6.4% are made up of only women.

In which sectors are startups active? The sector in which most of them operate is tourism. As is probably to be expected, a large proportion of these companies, almost 1 in 10, are active in information and communication technology (ICT), while the proportion involved in agri-food and life and health sciences is the opposite (8.6%). Interestingly enough, the order of sectors for foreign startups is slightly different: ICT comes first, followed by tourism and agri-food.

But what form does the product of Greek startups take?87.5% of companies include the use of digital technology as the initial idea, while 38.6% have a purely digital idea. Fewer have a “physical” idea but using digital technology (26.6%) or, conversely, a digital idea with a partial physical presence (22.5%). Only 12.4% follow the traditional, purely physical model. In any case, it seems that the vast majority of the startups in the survey, about 7 out of 10, had to readjust the original idea one or more times. In fact, 19.5% did it more than twice. Moreover, startups are, in the majority, an outward-looking business: 63.7% say they target international customers and only 36.3% target domestic customers. However, 1 in 3 say that their biggest problem is a lack of experience in attracting international customers.

It is also interesting that almost half of the startups in the sample started their activity with very low capital, from zero to 10,000 euros. Only one in five (21.7%) started with more than €50,000 in capital. 35.2% of these companies currently declare themselves profitable, while about half (47.9%) say they are not profitable in the current climate. In terms of the biggest challenges they face for their future, founders single out the ability to expand (22.8%), followed by staffing (19.1%), competition (16.9%) and the availability of finance (15%). Among possible changes that would improve their business, the founders in the sample choose “modification of the insurance and tax framework” (79.8%)more than any other.

Although the pandemic did not create the problems for startups that it did for other businesses(8 out of 10 founders say they implemented teleworking), overall the impact it had was rather mixed. Around half of the founders highlighted in the survey that the Covid-19 pandemic had negatively affected their business. 28.5% of founders felt that the pandemic had (partially or completely) a positive impact on the development of their company, while 22.8% said it had no impact.

In order to highlight the opportunities for the local economy from the development of startups, the diNeOsis survey frames the above interesting findings with data from previous surveys that had been carried out, as well as from the newly established Registry of Startups of the General Secretariat for Research and Technology. These sources also yield interesting findings, such as, for example, that employees in startups are paid fairly competitive salaries, while 4 out of 10 also receive company shares as a benefit. Or that in 2021 the top ten Greek startups raised four times the amount of funding that the top ten in 2020 raised, a sum of around €398 million.

At the same time, the research cites best practices from ten countries (nine European and Israel). It explains in detail the tax incentives given to investors in the UK, investor attraction policies in Israel, the creation of a research centre independent of universities in Germany, attracting companies to test a prototype product in the Netherlands, the incentives for attracting talent introduced by Estonia, digital public services in Ireland, and the renewal of entrepreneurship centres in universities in Italy. Finally, the study concludes with policy recommendations for the further development of Greek startups, as well as a guide with many sources of information for the aspiring founders of such businesses themselves.

It is often argued that startups are an entrepreneurial activity that fits the characteristics of the Greek economy. As can be seen from the above data from the diNeOsis survey, startups are, like most Greek businesses, very small in size. They also hire and pay well-qualified employees, which are available in Greece. On the other hand, startups also bring together characteristics that are sought after for the evolution of the Greek production model: they are outward-looking, exploit specialised knowledge and concern sectors in high growth internationally. Therefore, from this point of view, their healthy growth seems to represent an important and wider economic opportunity for the country and for the culture of local businesses.

To the article Research transNEOSIS: Mapping Greek startups, concerns and opportunities was originally published on Fortunegreece.com.