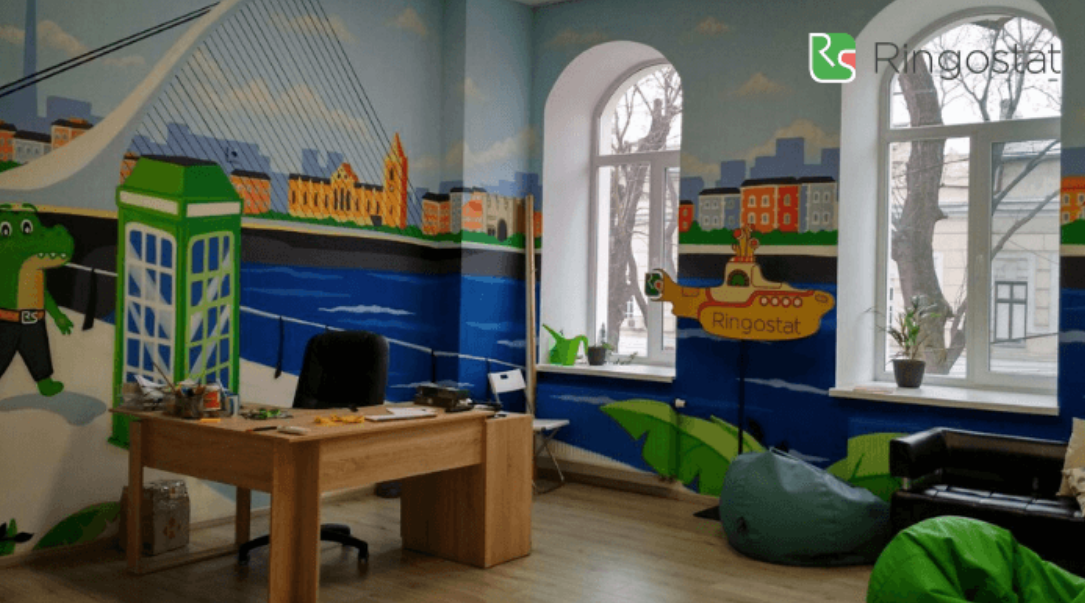 Please tell us a little about yourself and your work.

In the past I was a journalist, I also headed the “Finance” section in one of the Ukrainian business newspapers. In 2012, Forbes.ua was founded and I was its editor-in-chief. Then I served as the content director at Wargaming, a game development company.

For the past five years, I have been managing Ringostat, a platform for call tracking, telephony and end-to-end analytics. This company was founded in 2013 as a startup and has grown over the years into an entire ecosystem of seven analytics and sales tools. Ringostat is part of the Netpeak Group. In addition to Ringostat, the group of companies includes two digital marketing agencies, a group of product IT companies, an online university, an event marketing agency and several social projects.

Before the war, our business was profitable, with over 1,000 clients and a team of almost 80 people. But the war changed all that a lot.

Now many of our employees have moved to the west of Ukraine, where it is more peaceful than in other parts of the country. And those who remained in Odessa work mostly remotely. Because there are often air raids and it’s better to be closer to a shelter or other safe place.

In this Odessa office, most of the Ringostat team worked before the war.

How did you know that the war had started? Did you stay at home?

I live in Kiev-one of the cities that was immediately attacked. For me, as for most Ukrainians, the war started around five in the morning. I got a call from a friend who lives near the international airport. She was woken up by an explosion – it was Ukrainian anti-aircraft defenses shooting down Russian missiles.

After the call, I went to a news portal and it was immediately clear to me that it was war. My wife arranged for us to have a place in the bathroom where we could be relatively safe during the shelling. But then we conferred and decided to leave town. Although at first it just didn’t occur to me that in the modern world some crazy person could start a war in a European country.

Fortunately, we had what we needed, so an hour later we left the city. First we stayed with close friends near Kiev, and the end of our route was Transcarpathia, where we now live, very close to the Hungarian border. So if the situation gets worse, I can send my family to Hungary at any time.

Perhaps the scariest memory was when a Russian fighter flew over our car during the trip. It flew very low, straight over the roofs of private houses. I didn’t have time to study it in detail, but my 14-year-old daughter saw it very well and got a real shock. A few days later, she was still scared – even as the wheels of the car rustled on the asphalt, she thought the plane was flying somewhere in the distance.

Many other workers also fled. Some managed to get to Western Europe, or to Poland, Moldova, or Romania. Fortunately, all our work is done online, and we use our own virtual telephony to communicate with clients. Therefore, immediately after the move, our team quickly got back to work. After all, we basically only need a laptop, internet and a headset to work.

Is it true that there is less work now?

On the one hand, the Ukrainian market is going through really hard times (we excluded all clients from the aggressor country, which affected the number of projects), on the other hand, you can’t claim that Ukrainian business has already died. There are no hostilities in many regions and most companies are still operating. This means that customers are calling them, so they still need our phone services.

In addition, Ringostat now needs to actively enter new markets. We had planned to do this before, but the war has provided an additional incentive. One of the priority markets for us is Poland. We already have Polish customers: an OLX classifieds portal, a Ukrainian job portal with an office in Wroclaw, telemedicine companies selling commercial equipment, etc.

The whole Ringostat team is constantly trying to expand this list. In the last month

I have no doubt: we have a lot to offer to Polish business. Indeed, in most companies, regardless of the country, the processes are similar. They involve advertising and communicating with customers over the phone. And our products are suitable for this. For example, our virtual PBX and extension to receive and make calls directly from Google Chrome browser. We also have a callback request form for which 15 different versions are provided. Call tracking, on the other hand, is a tool that shows exactly which ad the customer called from. Thanks to it, the marketer understands which channels really work and knows where to invest the budget.

Moreover, we are an official technology partner of Google and we are a Google Premium Partner. And this can be considered as a kind of quality mark. After all, Google is trusted by most IT professionals and marketers.

How has the team’s work changed under the new circumstances?

– In the beginning, of course, there was chaos, because it was difficult to collect thoughts. Many employees mainly had to take care of their safety, buy food and medicine, and move to a quiet place. But now we have finally gotten into the existing pace of working on tasks. We now work as before: at least five days a week, eight hours a day. And often more, because now we have to mobilize to keep our business running.

Many of our employees are actively learning foreign languages because we need to communicate with European customers and create content for them. Fortunately, many colleagues knew English at a high level even before the war. We have specialists who speak Romanian, Polish, French and other languages. Improving languages and other skills is practically part of our job.

Propaganda is very strong in Russia. How does Ringostat deal with it?

“We have been ‘fighting’ on the cyber front since the first days of the war. One of Ringostat’s products is Internet telephony, which makes it possible to inform citizens of the aggressor country about how things really are. More details I can’t give.

As I said, Ringostat is part of the Netpeak Group. Therefore, together with other employees and other IT companies, we participate in information resistance under the leadership of the Ministry of Digital Transformation and its head Mikhail Fedorov. For example, we fight against false content about the war in Ukraine. We participate in dialogues with users exposed to propaganda. It is hard to believe, but Russian media say that Ukrainians are shooting at each other and telling other nonsense. Therefore, it is important to convey the true state of affairs to the residents of Mordor and ban those news channels that spread lies and call for violence.

Incidentally, Netpeak Group has also launched the Frodo and Mordor channel on the popular messenger Telegram. It collects news, trivia and memes related to the war. In just over a month, it has already gained 197,000 subscribers. We also use the channel as a platform to support other startups and volunteer organizations.

Are company representatives helping others during this difficult time?

Yes. Starting in February, we launched the “Keep the Economic Front” campaign. It targets two types of users

Of course, the Netpeak Group, to which we belong, helps people directly, ordinary residents of Ukrainian cities. Only in the first weeks of March we sent several truckloads of food and ammunition and 2500 liters of water. We donated tools and equipment to the Territorial Defense for putting up dams and dugouts, and diesel generators. We donated food and medicine to volunteer centers, maternity hospitals and seven military hospitals.

We helped people evacuate from major cities – we brought them to train stations. We provided food and medicine to those who could not buy it themselves.

We even took care of animals. Even before the war, a group of companies had a project called GladPet, where you can choose a pet from a shelter. And during the war, the problem of abandoned animals became more acute because refugees unfortunately can’t always take a cat or dog with them on a crowded train or bus. During the war, GladPet helped house dozens of abandoned animals, donated a truckload of food to the shelter in Nikolaev and the owners of dozens of dogs.

Why do you think it’s so important for Ukrainian startups and IT companies to keep working?

Because it is the IT sector that can now make a valuable contribution to and support Ukraine’s economy. Of course we have suffered, like other companies, losing some of our clients, but fortunately IT companies don’t have a strong physical dependence on an address or an office. You can always take your laptop and move to another city, or even country, and continue your work there. Moreover, many companies had many clients in other countries, and we have European working standards. Therefore, there is a chance to enter new markets and stay afloat until the end of the war.

The main thing is that business, the army and Ukrainians are strongly united. If the aggressor thought he would scare and confuse us, he was wrong. We understand very well that now we need to work efficiently and help each other. And we are just one of many companies that are doing just that.