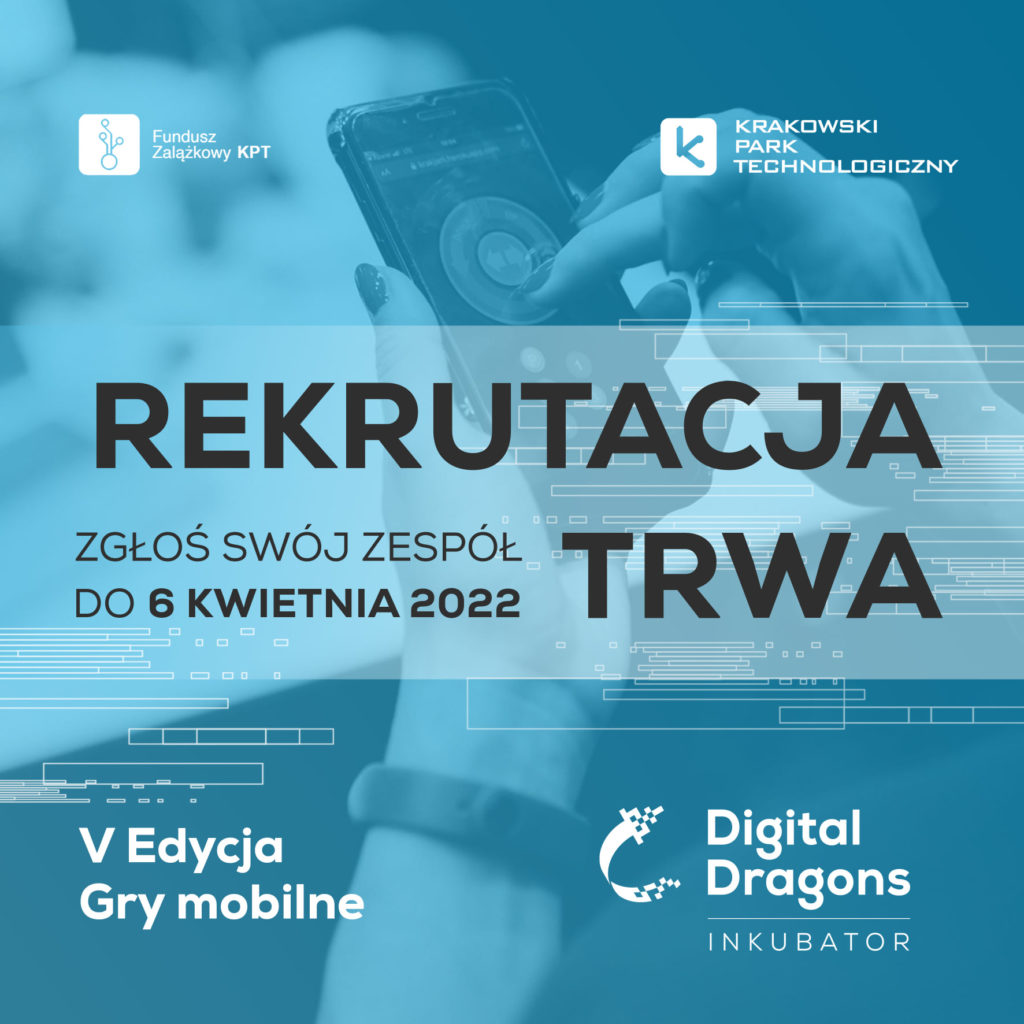 But before we go into the history of the startups mentioned above, a word of introduction.

Digital Dragons Incubator is an incubation program organized by the Kraków Technology Park. It’s addressed to independent game studios, which have been active on the market for no longer than 5 years and have at least one game for mobile devices in production. Recruitment for the fifth edition of the program is now open.

If you want to take part in it, you can apply until April 6 this year. All you need to do is visit the Digital Dragons Incubator website and fill out the registration form found there.

So far, the Kraków Technology Park has implemented four editions of the incubation program for the game industry. Their participants praise the organizer primarily for the high substantive level of the conducted workshops and individual approach.

– Each of the studios is a champion in its own league. I mean the spectacular leaps in development, such as debuts on the stock exchange, acquiring a foreign publisher, a great investor as a partner, pivots between platforms, a successful premiere, quantitative development of the team. Smaller scale successes are also important: closing a business inefficient project and starting a new one, building a good business model for the studio, building the studio’s bizdev practically “from zero to hero”, reaching for new technological and business tools – says Łukasz Leszczyński, games industry acceleration manager at the Kraków Technology Park.

Among the startups that completed the program were Serious Sim and Innominate Games. Their creators mention that before participating in the incubation program they faced typical problems that game studios usually face. They mention difficulties in finding a publisher, limited marketing budget and lack of media interest in their games.

The story of Serious Sim

– When we joined the Digital Dragons Incubator, we had already been operating as a limited liability company for over a year. We were also more than a year after the premiere of our first product – a game called Radio Commander, from which we were still generating income to cover our current operations – recalls Jakub Bukała, CEO of Serious Sim.

Moreover, his team already consisted of five permanent members and was focused on pre-production of a new title based on our own IP called Heading Out. Additionally, he had a playable demo in the form of Vertical Slice, a website on Steam and relatively functioning communication channels. So what was he looking for? A publisher. He was also hungry for knowledge, training and workshops to help his team improve their skills.

And did the Serious Sim team find what they were looking for? Definitely. On top of that, during the program offered by the Digital Dragons Incubator, they met a lot of interesting people, and also had the opportunity to revisit their own design brief and take another look at their plans for running the studio.

– During the incubation, we were able to find a publisher on our own, sign a contract, get funding, and start the core production of Heading Out. We have also expanded the team from 5 to 10 people and have a goal of completing this project by May 2023. In the meantime, we are in talks with potential investors with a view to further development of the studio – says Jakub Bukała.

Jakub Bukała adds that participation in the program helped him gather valuable feedback. Michał Przybyszewski, CEO of Innominate Games, also draws attention to this point. In his opinion, game production requires constant consultations with people who are not directly involved in the project. Thanks to this you can get a lot of feedback, which can later be used during the realization of the game itself.

– Thanks to this, already at the early stage of production we corrected the approach to solving several problems that could occur in our production in a dozen or so months. The biggest advantage of the Digital Dragons Incubator were the conversations with more experienced people stripped of the PR pap – recalls Michał Przybyszewski.

When his team joined the incubation program, they were just finishing the process of creating a game called Countryballs Heroes. And the main problem he faced at that time was a marketing one.

– Marketing a small game with a limited budget is extremely difficult. Trade portals in the vast majority ignored any information about our game, and the little money we had for external marketing did not allow us to fully develop the potential of the production – recalls Michał Przybyszewski.

Now, after participating in the Digital Dragons Incubator program, Innominate Games has a publisher with whom it continues to work on the game presented during the incubation.

Why is it worth applying to the Digital Dragons Incubator?

Primarily because of the expertise. Experts participating in the incubation program will prepare you to release your game, and also teach you how to talk to potential investors about the capital needed to further develop your game project.

The 5th edition of the Digital Dragons Incubator includes:

– Since the fourth edition of Digital Dragons Incubator, we have been cooperating with Fundusz Zalążkowy KPT, which looks for investment opportunities. So we reach for the most effective approaches from various development programs and andragogy – says Łukasz Leszczyński.

“I qualified for the Digital Dragons Incubator! What’s next?

Now a workshop awaits you, which will take place between 28 April and 25 June 2022. During them you will develop production, business and marketing skills.

Workshop topics will include:

– The package of topics differs in editions that we address to studios designing games for mobile devices in relation to the editions for studios with projects for PCs and consoles (e.g. User Acquisition is a topic specific to mobile games). We focus both on supporting specific game projects, but also on inspiring the strategic development of studios with a view to their next projects, horizontal cooperation with investors, acquiring new employees, IPOs, etc. That is why we are building a wider and wider network of partners – publishers and investors, to whom we offer good teams, and we make it easier for the teams to start cooperating with investors and/or publishers – says Łukasz Leszczyński.

The culmination of these workshops will be Feedback Day, i.e. consultations with experts from development studios, and Demo Day in September. On this day, together with other participants of Digital Dragons, you will present your project to venture capital funds.

But that’s not the end of the Krakow Technology Park’s support.

– After the incubation we try to stay in touch with the graduates and observe the further development of their games and studios, and where possible support them as well. The whole digitaldragon ecosystem for the game industry helps in this: Digital Dragons conference, academy, internationalization programs, KrakJam, game industry research, industry network – says Łukasz Leszczyński.

Do you want to participate in the Digital Dragons Incubator program? Apply by April 6!

The article was created in cooperation with the Kraków Technology Park.