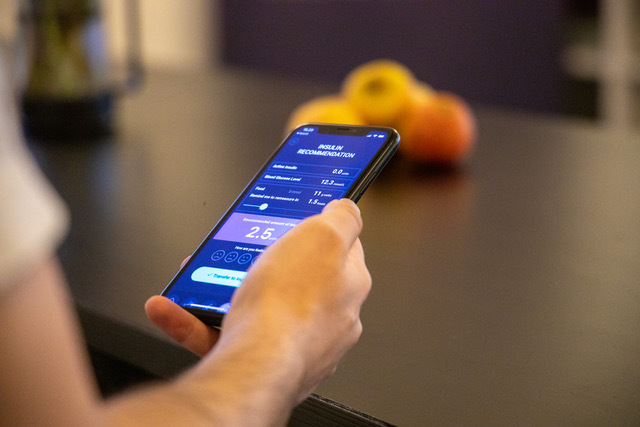 This article has been prepared in collaboration with TechBBQ.

A good adventure can sometimes have an unfortunate twist.

Entrepreneur and founder of Hedia, Peter Lucas, grew up with diabetes and his father struggled daily with the disease. Excessive blood sugar fluctuations can have fatal consequences, and Peter had to rescue his father from insulin shock several times when he fell asleep on the sofa after night work without eating. But in 2010, he was diagnosed with type 1 diabetes himself.

After several years in the restaurant business, the diagnosis knocked Peter Lucas out. He suddenly couldn’t drink a Coke or go for a spontaneous run with his child without first taking into account all the parameters you need to be aware of as a diabetic.

But in 2016, together with his wife, Christina Kildentoft, and business partner Andreas Jespensgaard, he took the spoon in the other hand. The three entrepreneurs founded the start-up Hedia, which wants to make it easier for the 320,000 Danish diabetics to live with the disease.

With the help of a senior physician at the Steno Diabetes Center, they launched an algorithm-driven app the following year that calculates insulin doses, helps regulate blood sugar levels and makes the disease as manageable as possible.

“I was used to this somewhat chaotic life. So I saw myself constantly having to go and measure and weigh to make sure my blood sugar levels were stable. And it didn’t turn out that way at all. This is partly due to our app, which I use between 8-10 times a day,” says Peter Lucas, co-founder and CEO of Hedia.

The app is currently used by thousands of users across 11 different EU countries and is translated into six different languages. According to studies, Hedia improves blood glucose levels in unregulated users by 12.3 percent on average

When diabetics are not properly regulated, blood sugar levels can fluctuate inappropriately. This can eventually have drastic consequences, and untreated diabetes can lead to both impaired vision or blindness, kidney damage and, in severe cases, gangrene.

In the Hedia app, you record your activity, insulin and food data. From there, the algorithms take over. The technology guides users on the correct amount of insulin required and corrects itself when users miscalculate how many carbohydrates a meal contains. Over time, it ensures through the data set that the app is constantly getting smarter about the specific individual’s insulin needs and habits.

“When you have type 1, you’re basically using carbohydrate counting and a formula that indexes the effect of food and activity on blood glucose. It’s damn hard to do in your head. When I was diagnosed with the disease, I needed a lot of help to keep everyday life from becoming a constant struggle. Because I kept making math mistakes. I still do when I have to do it in my head,” admits Peter Lucas.

Hedia is registered as a medical device throughout the EU and authorised by the Danish Medicines Agency. The app’s food database has been certified by a professional dietician and so far 25% of Danish diabetes nurses have been trained in the tool.

The company has just raised DKK 20 million in a new investor round, bringing the total capital raised in Hedia to DKK 50 million since its establishment in 2016.

Around 28,000 people in Denmark suffer from type 1 diabetes. It is often a big upheaval for newly diagnosed people to keep track of both nutrition and activity on a daily basis. That’s why Peter Lucas dreams that the app will eventually ease the burden of living with the disease even more.

“We have already planned the clinical trials for the next generation of Hedia technology. Here we are working on the basis that the algorithm can predict your insulin or carbohydrate needs 30 minutes into the future. This will give users a much better chance of maintaining stable blood sugar levels.”

“At the same time, we are clearly looking at the US market right now. There are many factors that play into that journey, but we are determined to get to the US either in 2022 or 2023,” the director said of the strategy.

This year, the Hedia app was voted the best type 1 diabetes app by UK certification company Orcha. And founder Peter Lucas is delighted. He hopes that as many people as possible will be helped to manage their diabetes.

“I’m more spontaneous than my dad is and time can get away from me. Unfortunately, it’s hard to live like this with the condition we both have. That’s what Hedia is here to help me with. That I can live as an entrepreneur, go out with my friends or have an ice cream on the beach with my daughter,” concludes Peter Lucas.

– Where is the life science ecosystem going right now?

“In these years – and especially in 2021 – we have seen a tremendous growth in the life science ecosystem. Investments are being made like never before in both established companies as well as attracting venture capital for startups and scaleups. Denmark’s global position has generally been strengthened such that we are now in the top 3 in the world in several rankings. This position is the result of years of strategic investment by both the private and public sectors, which is now bearing fruit.

At the same time, Denmark is a forerunner in the transition to a fully digital society, where we are increasingly using digital solutions in healthcare, where people are their “own doctor” and where the amount of available health data is exploding. At the same time, however, we have a pressurised healthcare system, which for years has been subject to an increasing administrative burden, a demographic of more and more elderly and chronic patients, and a political desire for ever greater optimisation and efficiency. We need to find the right balance here so that our (expensive) welfare society does not go bankrupt – and new technologies, new services and new products are part of the answer.

I am convinced that if we can develop a unique combination, taking the best from tech and life science respectively, we will be in a really strong position in the global competition to attract the brightest minds, develop the best patient-centred solutions and make our healthcare more efficient.”

The post Hedia will give people with diabetes back their freedom appeared first on startupmafia.eu.