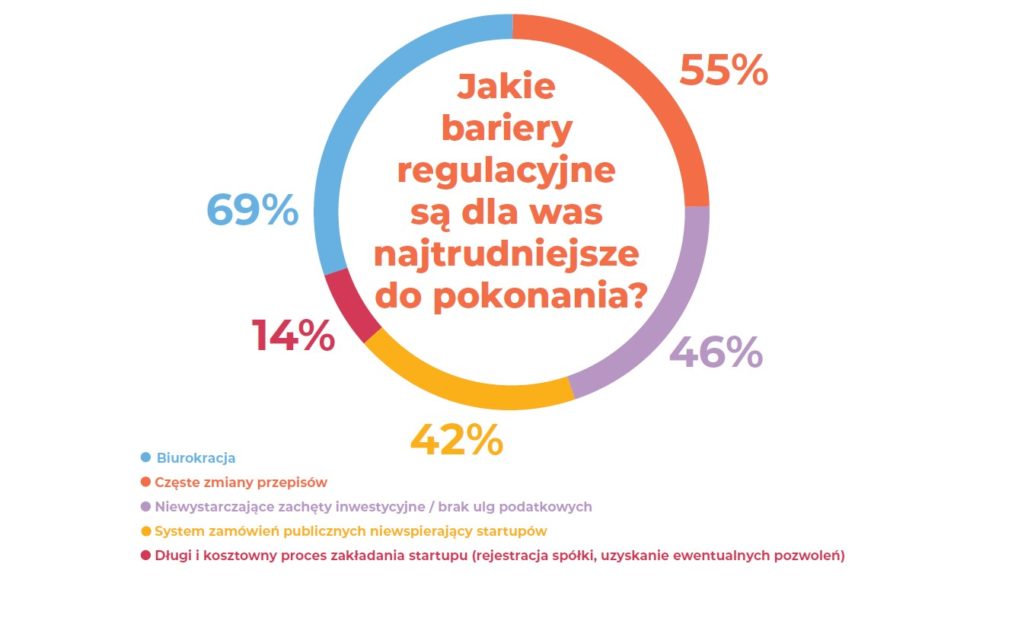 Bureaucracy is a challenge for startups

The Startup Poland Foundation prepared a report “Polish Startups 2021”, in which it asked founders, among others, about regulatory barriers which are the biggest obstacle. As many as 69% founders indicated that the most difficult barrier is… bureaucracy. In second place were frequent changes of regulations (55%), and in third place – insufficient investment incentives and lack of tax relief (46%)

– The startup community has been asking for tax breaks for investors for years. Examples that this is necessary can be seen with the naked eye. There is a reason why so many great startups are created in the United States, where access to capital has been very easy for years. A natural feature of startup ideas is an increased risk of failure of such an investment. Incentives, e.g. in the form of tax breaks, could significantly help in this matter,” Tomasz Snazyk, CEO of Startup Poland Foundation, points out in the report.

Bureaucracy and administration in Poland is like a fat cat – huge, lazy and with an unlimited appetite. The money.pl portal indicates that current expenditures on this segment amount to ca PLN 25 billion annually. According to data from the Central Statistical Office (GUS), there were 525 thousand people working in the public administration, national defence and social security sector in 2020, where in the mid-1990s there were just over 100 thousand.

And of course – the law is changing, administration of the state in the 20s of the 21st century is also more demanding than 30 years ago (considering also, for example, the regulations of such bodies as the European Union), but paradoxically not much is simplified here, and even made more difficult. And not only for startups themselves, but even for officials. And this is all due to the so-called legislative diarrhea, i.e. frequent changes in the law, as indicated by the founders themselves in the report.

– Analyzing Poland’s legislative activity in the economic field, one can come to the conclusion that it is rather unfavorable for entrepreneurs and building an economy based on strong local companies. Something that is important from the point of view of an entrepreneur is the stability of law and its clarity, and unfortunately in both of these features the national legislation fails, deterring many talented and ambitious people from entering the path of business – says Tomasz Rykaczewski, Vice President of the Board of the Prospect Foundation.

The Polish Order has been amended 852 times. What is legislative diarrhea?

These frequent changes in regulations, which founders mention as the second greatest barrier to development, are absolutely not an invention or hyperbolisation. In an interview with Rzeczpospolita, Konrad Piłat, tax advisor at KND, pointed out that 852 amendments have already been introduced to the Polish Order. And this in about 40 days from its introduction. And this is not the end of the changes announced by the government. And we are talking, after all, about a law that turned the bureaucracy of enterprises upside down.

– Typically, investment plans have a few-year perspective, and it is impossible to carry them out in the face of the risk that regulations concerning a given industry or type of business may change from month to month. This significantly reduces the willingness of funds and entrepreneurs to invest, which has a negative impact on the overall level of the economy – says Tomasz Rykaczewski.

These rapid changes of regulations, often written on the hasty knees, are not only a problem of the Polish Order. Even during the outbreak of the coronavirus pandemic we had to deal with frequently changing laws or announcing new restrictions from one day to the next. This is basically the reality under the rule of the current government. Constant uncertainty does not help build a strong position on the market or a well-functioning startup.

– Entrepreneurship in Poland is unfortunately a battle with the state on many levels. For a young and inexperienced team, this poses a certain psychological barrier. The list is quite extensive: choosing the right form of business activity, selecting the form of taxation, finding a tax advisor, an accountant specializing in the given field, fulfilling all the initial formalities related to running the company – setting up a bank account, calculating the ZUS contribution (for creating financial forecasts and budget), the amount of tax paid, both CIT and PIT. Without such basics we are not able to accurately calculate the budget for the project. If only because of the recognition of tax deductible costs – here the most complicated tax system is always a mystery. Is the purchase of tangible or intangible goods for the company’s needs 100% tax deductible costs or maybe 50%? – says Bartłomiej Pąperski, CEO of Centrum Inżynierskie RAPTOR sp. z o.o.

The problem of legislative diarrhea and hefty bureaucracy does not only concern startups, because companies from the SME sector, or basically any other company, are also affected. A good example is the hunting and military industry. Bartłomiej Pąperski, who wanted to set up a hunting store, had to collect permits from in order to obtain a license to sell weapons and ammunition

On top of that, there was a package consisting of eight different documents. Not surprisingly, 14% of founders indicated in the report that the long and expensive process of setting up a startup, i.e. registering the company and obtaining any permits, was a major barrier.

– It all took me a few months and together with the rent, which I had to pay for the empty premises, it cost me tens of thousands of PLN. Nobody knows how much such exaggerated and unnecessary bureaucratic requirements really cost Polish entrepreneurs. There is no doubt that in the scale of the whole economy, these are huge amounts – says Bartłomiej Pąperski.

PSA (Prosta Spółka Akcyjna) was the problem that was supposed to solve the issue of duration of company registration. The minimum share capital for PSA is one zloty, and the whole registration could be done by an online form. However, as the authors of the Startup Poland Foundation report point out – in the first month of PSA’s functioning only 39 such companies were registered.

There are no investment incentives and tax

The third most frequently indicated answer in terms of regulatory barriers was insufficient investment incentives and lack of tax breaks. Before the introduction of the Polish Deal, the only meaningful relief was the IP Box allowing companies conducting R&D to benefit from a preferential 5% CIT/PIT rate.

It was not until the Polish Deal that the PIT relief was introduced, but for… Venture Capital funds. The PIT relief for VCs applies to investors who invest in the form of an alternative investment company (ASI) or directly in capital companies in which at least 5% of shares are held by ASI. At the very beginning, the investor will be able to benefit from a tax relief amounting to 50% of the investment amount in the tax year.

As infor.pl points out, the amount of the expenditures for such shares can be deducted from the taxpayer’s income subject to taxation on the basis of a scale or a flat tax up to a maximum of PLN 250 thousand in a tax year.

However, there are more requirements to be met in order to take advantage of the relief

So as we can see, it is not as colorful and simple as it might seem. What is more – while it is good that VC funds got the possibility to use the tax relief, it is a pity that it applies only to them. There is no meaningful tax break for startups, and yet not every founder benefits from VC funding. Some startups develop on the basis of their own resources or in the form of bootstrapping. However, they will apparently have to wait longer.

– Another problem is tax issues. Unclear regulations, their complexity and imprecision effectively scare many people away from business. Nowadays, it is increasingly difficult to imagine running even a simple micro-business without accounting or even tax support. Polish entrepreneurs are also at the forefront of Europe, if we look at the amount of time spent on formal and legal issues in relation to substantive work on company development – says Tomasz Rykaczewski.

These tax issues also hit another aspect – hiring employees. It is not easy to attract specialists to startups and certainly the costs connected with their employment do not help. As many as 30% of founders say this is a serious barrier to growth.

Institutional clients don’t want to use the help of startups

It might seem that this is the end of fighting with the state, but it’s not. After all, startups that want to work for institutional clients also have a rough life. 42% of startups indicated that they experience an unfavorable procurement system design. So-called B2G customers make up 31% of the target group of all startups.

Administration, local governments, offices or schools are difficult business partners for startups. They are reluctant to use their services or products, and often regulations, rules and requirements kill founders’ opportunities. Which doesn’t help to innovate and digitize the Polish state system.

Which is somewhat tragicomic, considering that Polish startups often take an active part in the digitalization of countries such as Saudi Arabia. We are talking here about Crafton Middle East. And it should be emphasized that this country has extremely high requirements for startups and even forces them to use local resources and open companies there.

– Saudi Arabia is a place where not everyone can do business. This country puts a lot of emphasis on working with local suppliers, and we are such a local supplier. We have our headquarters there and our representatives who are also Saudis. As a Polish company we could not work on government projects. Having our own representatives there, we are able to do that and for the last five years we have been quite successful in it’, says Michał Zieliński.

To sum up, entrepreneurship and innovativeness in Poland are unfortunately very often connected with fighting with the state. Bureaucracy, lack of tax reliefs or frequently changing legislation distract founders from what is most important – running a business and developing their products, and force them to deal with issues and problems which are not encountered in many European (and not only) countries. Despite this, innovative companies and large enterprises are developing in Poland. They often choose this more difficult way than, for example, directing their resources to another region of the world.