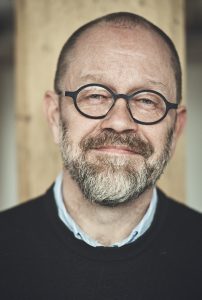 XR technology is already helping large companies inspect, maintain and repair machinery and buildings. But will the technology become indispensable across the value chain – or just a nice-to-have?

Virsabi has the corona crisis to thank for the fact that augmented reality glasses suddenly became a must have for Jorgensen Engineering, a Danish company that makes packaging systems for food companies, among others, and sells them all over the world.

The industrial company’s challenge was that once they had installed a new plant at a customer’s site, the operators could rarely remember all the details from the training and therefore had to resort to a heavy manual.

“So we discussed how to use HoloLens (AR glasses produced by Microsoft, ed.) to support the operators in their use of the system,” says Jens Lauritsen, Chief Product Officer at Virsabi.

The project then stalled, but when the Danish Industry Foundation put money into exploring the use of XR in Danish industry, the project was revived. And then came the corona crisis.

“It made sense to bring out the HoloLens glasses again so that Jorgensen Engineering’s customers could continue to get support during the corona crisis. Jorgensen was limited by the fact that they couldn’t put a service person on a plane or send a local person to the customer because of travel restrictions and local regulations,” says Jens Lauritsen.

So Virsabi and Jorgensen Engineering set about testing so-called remote collaboration of. The factory’s machine operator was introduced to the AR glasses, and the next time there was a problem with the packer, they could call up a specialist at Jorgensen who could see the problem from the customer’s angle and share digital guidance and information, for example in the form of images and graphics directly on top of the packer.

“We quickly found that Jorgensen could help their customers reduce plant downtime, which has a major impact on production efficiency. At the same time, they could save a man who didn’t have to get on a plane to solve the problem. So this was also a case for Remote Collaboration after Corona,” says Jens Lauritsen.

Today, Jorgensen Engineering has implemented XR solutions across the value chain – from product development and packaging plant design to sales and marketing.

In general, however, Jens Lauritsen’s experience is that when Virsabi talked about AR technologies before the corona crisis, the reaction of potential customers was often that it was something nice to have – not something indispensable. But with the corona crisis hopefully soon to be resolved, companies need to reap the value of what they learned during the crisis.

Jens Lauritsen therefore points out that AR technologies can be used in collaboration between supplier and customer, reducing the need to travel, enabling problems to be solved faster and reducing companies’ carbon footprint – even when we can travel freely again.

However, this does not necessarily mean that all companies will implement XR somewhere in the value chain.

“In my view, virtually all companies that can gain value from XR are testing it on their employees and customers. They see the value in it, and now they need to find out where it makes sense to put the technologies into practice in their customer relationships,” says Jens Lauritsen.

VR must be used in specific situations

Aarhus-based Cadpeople is if anything a veteran in the XR industry.

The company was founded in 1992, when the founders were inspired by the sci-fi film The Lawnmower Man, which is a kind of Frankenstein story about a gardener who undergoes a major transformation with the help of VR and a scientist.

“It’s full blown VR with glasses and advanced machines. And that’s what inspired us to start working on RealTime 3D,” says Claus Riekehr Møller, founder and CEO of Cadpeople, explaining that while both RealTime 3D and VR are built around 3D models, RealTime 3D takes place on a touchscreen, while VR is experienced through a pair of glasses.

Today, the company has found its niche in visual communication and digital learning, and Cadpeople’s customers include a number of heavy industrial companies as well as schools and educational institutions. One of these is the wind turbine manufacturer Vestas, for whom Cadpeople has carried out several assignments – both in XR and as RealTime 3D.

“We have recreated specific wind turbines in 3D, which the wind turbine technicians can interact with and practice on via a large touch screen. Among other things, they can take control of the wind turbine and make various measurements with a multimeter,” says Claus Riekehr Møller.

That the course is created in 3D models and not as a VR experience, for example, is a very conscious choice on Cadpeoples’ part.

“When a client asks us to create a product for them, as a digital learning agency we start analysing what their real needs are. If they are going to teach in a classroom, for example, it’s not good to let a single student into a VR room where the teacher can’t see what’s happening,” says Claus Riekehr Møller.

So often the solution is to put the content on a touch screen. The content can still be created in 3D, so the teacher and student can rotate and interact with it, but the difference is that the teacher can better explain and engage the students.

Cadpeople has Vestas as a client.

“VR has always fascinated people because you can recreate everything in a virtual world. That’s why many people think it’s the only solution for them. The downside, however, is that when you put on the glasses, you cut yourself off from the rest of the room. In the long run, I therefore believe more in AR, where you also put on a pair of glasses but without the cut-off from physical space,” says Claus Riekehr Møller.

However, there are a number of unique use cases for VR glasses. Claus Riekehr Møller highlights situations where there is a need to put the user into a very specific space or learning situation.

“It’s hard to know how you react when you’re standing on top of a windmill and looking down. Are you really too high up to find it funny? It’s a bit late to find out once you’ve got the job,” says Claus Riekehr Møller.

The digital twin of the machine

When AR Comply’s customers put on their AR glasses, they not only see the room they are standing in, they also see the room’s digital twin. Machines, equipment and the building itself are therefore assigned a number of digital points that employees can unfold and, for example, view manuals and comments on defects.

The solution is targeted at industry and AR Comply’s main goal is to digitise inspections, maintenance procedures and checks on complex equipment, buildings and machinery.

“You can go in and do a digital twin of all the processes around maintenance, inspection and the actual documentation of critical data. So you see the factory or machine in real life, but you also have this digital layer that makes solving the task more efficient and time-saving,” says Anders Havelund Krøyer, CEO of AR Comply.

The concept behind AR Comply was originally developed by Kanda, which creates training material in XR. After a successful run in collaboration with a major shipping company in 2018, Kanda put the project on hold. The following year, however, Anders Havelund Krøyer was introduced to the project and thus AR Comply was created.

The company currently has one paying customer and several pilot projects running. What they have in common is that AR Comply gets the customer on board early in the process to develop their customised software solution.

“That’s why it’s also worth gold when we get feedback, because then we can implement it at an earlier stage in the product development. Better to get that aha experience early in the process,” says Anders Havelund Krøyer.

AR Comply often experiences a challenge with implementing new technology in larger companies. Namely, that companies need stability and that it can sometimes be more important to have a high level of security and predictability with old familiar procedures. Although an innovation can potentially deliver a significant optimisation, the implementation of new technology also always brings new risks. That balance and trade-off can sometimes be a barrier.

“It’s not a question of if we will use the technology – but when. However, we need big companies that have the courage and take the first step, because they are also the ones with the finances to test it. I have no doubt that the future will be with some kind of AR layer with relevant data and guidance when it comes to optimising these procedures,” says Anders Havelund Krøyer.

The post Digital manuals and training material in XR could be the industry’s next must have appeared first on startupmafia.eu.