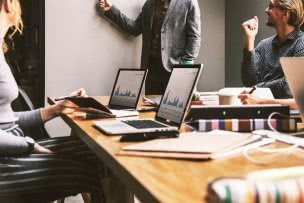 Companies often only find out about a cyber attack when it is already too late. Good defence programmes and regular backups can reduce the risk of an attack, but further steps are indispensable for optimal protection. We show where the greatest dangers lurk and what protective measures companies can take.

Ransomware, social engineering and phishing – everyone has at least heard of them, but hardly anyone knows what these terms from the computer world actually mean and what dangers lurk behind them.

Increasing digitalisation presents companies with new challenges in terms of security. Cyber attacks are a constant threat in today’s business world. Among other things, this development also affects the work of the police, because the pursuit of criminals is becoming increasingly difficult and complex due to digitalisation. Perpetrators can initiate their attacks from anywhere in the world. That is why the cantonal police authorities often work closely with those of other cantons and countries.

One of the most common cyber attacks among SMEs is the so-called “CEO fraud”, a trick in which typical e-mails from the boss are copied by teams of cyber criminals and money payments are initiated in them. The payments of the unsuspecting employees end up directly with the hackers. Because such e-mails are often not recognisable as forgeries at first glance, it is always worthwhile to make enquiries by telephone in the case of surprising e-mails.

Similar tactics are also used for applications by e-mail, fictitious complaints or product enquiries. The possibilities for cybercriminals are almost endless, the dangers often hardly recognisable. For example, websites are regularly created with forms that look confusingly similar to those of online shops. Or customer data is requested by telephone under seemingly plausible pretexts.

Attacks on company data are often carried out using crypto-ransomware, a dangerous malware. The software encrypts all information in the computer system of the affected company, and a ransom payment is demanded in return for the release of the information. In cases of such attacks, the expert advice is generally: do not pay. Because while there is no guarantee that the data will be released, every payment finances further attacks.

To prevent crypto-ransomware attacks, it is not enough to rely on regular back-ups. If these are stored on the network, they are just as affected by the attack. Even with additional antivirus programmes and firewalls, the job is not yet done. Although these offer a certain basic protection, they cannot do anything against newly written malware that is not recognised by the programmes.

Because human errors significantly increase the risk of cyber attacks, awareness-raising and regular employee training on the topic of cyber security are recommended for companies of all sizes. Prevention is also the focus of Swiss insurance companies such as Zurich Switzerland, which, in cooperation with the internationally renowned company SoSafe, offers companies comprehensive insurance solutions with integrated basic training on dangers and risks in cyberspace for employees. This lays the foundation for a sensitised workforce. Such training should ideally be repeated annually and supplemented by vulnerability scans (such as penetration tests).

Who is most exposed to the risk?

Good preparation and awareness-raising among employees are the be-all and end-all when it comes to cyber security. Nevertheless, companies of all kinds can be attacked, with company and customer data being stolen and, in the worst case, even made public. Particularly vulnerable are companies such as online shops, whose daily business takes place predominantly online. So-called DDOS attacks can paralyse their business for several days. This often has far-reaching consequences and reputational damage for the affected company, for example if purchases are made with customers’ credit card data.

The following tips for businesses do not guarantee complete protection, but they do reduce the likelihood of an attack and the extent of its aftermath.

Should a cyber attack occur despite protective measures, it is important to report it to the cantonal police. This is the only way to track down the perpetrators and prevent further attacks.

The post Cyberattacks and how businesses can protect themselves against them appeared first on startupmafia.eu.