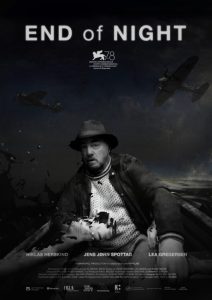 Experiences with XR elements are becoming increasingly common in the cultural and communication industries. This can be seen in film and theatre, where the technology is used to make the audience feel fully part of the experience, or in companies where prototypes are presented in AR. But even though XR has become part of everyday life, there are still higher demands on what the technology can actually do.

Joseph rows and rows and rows in his memoir. First through the streets of Copenhagen, scarred by the devastation of World War II, then out to sea, where waves threaten to topple the little rowboat. Finally, he arrives in Sweden, where he is confronted with everything he was forced to leave behind in Denmark.

The End of the Night is the story of Josef, a Jewish man who flees from Denmark to Sweden in 1943, told through a film created in Virtual Reality by the production company Makropol.

The main character Joseph in The End of the Night.

“The main character sits right in front of you, looks you in the eye and tells you a story. And because he is sitting right there, a different presence is created. You feel the main character’s insecurity when you’re out on the open water. You don’t experience it at arm’s length, but on your own body,” says Mads Damsbo, founder and partner of Makropol.

The production company began working with virtual reality in earnest in 2014, when Makropol was asked to tell a story from five different angles. The project was called Skammekrogen and the focal point was a dinner with five family members.

“I had heard about VR, but didn’t think it was for us. Anyway, we bought a pair of VR glasses on Kickstarter, and as we sat playing with them, we found out that you could actually show a movie on the glasses. Suddenly you could have an experience through the eyes of another person,” says Mads Damsbo.

Makropol has received much recognition for their work at the intersection of film and VR. Night’s End won the award for Best Immersive Story at the Venice Film Festival last year. Despite the success, Makropol continues to challenge the technology and the VR medium.

“Right now, it’s not possible to smell, taste or feel in VR – but we’ll probably get there soon. The question then is what we use it for and how we use it in an ethical and exciting way. I hope that more resources are devoted to researching how humans can exist and experience in virtual worlds. It’s still uncharted territory,” says Mads Damsbo.

VR takes the audience back to 1146

In Viborg, Jakob Tekla Jørgensen walks around waiting for more technological power. He is the artistic director of White Hole Theater, which will premiere the XR show 3 Kings in the summer of 2024.

“Some of the things we need to be able to do then, you can’t do now. So we rely on the road maps that both the tech giants and our smaller collaborators have laid out hold. We are a theatre, so we need to have many people live at the same time. And a lot of the technology we use isn’t geared for that yet,” says Jakob Tekla Jørgensen.

White Hole Theater is therefore constantly testing the limits of technology. In the summer of 2021, audiences could see the mini-festival Arnold’s Vision, in which a single actor in motion capture suit in a motion capture suit. In the summer of 2022, White Hole Theater will take the next step by having four actors and five extras re-enact a battle that took place in Viborg.

“I hope the audience feels that the ground is a little bit different when they leave there. That they feel like they’re being thrown back in time, when people fought to become king,” says Jakob Tekla Jørgensen.

The audience plays a direct role in the battle, however, because White Hole Theater also mixes a gaming element into the performance. Four selected audience members play along with the actors and get to influence how the battle ends.

“They have to feel like they’re part of something big, while each having their own perspective. In the long term, we hope VR theatre can be a very special immersive experience for more than four people,” says Jakob Tekla Jørgensen.

Rokoko will create presence in XR

Rokoko is one of the companies helping VR theatre pieces and films become reality. The tech company sells motion capture-equipment that enables game companies and filmmakers to capture human movements, which can then be linked to animated characters. So a human can become a troll, an alien or something else entirely.

“You can interact with the virtual world through our technology. Either by recording a series of movements and creating an animation, or by taking motion capture-equipment and walk around the metaverse in real time. In other words, you become a human joystick,” says Jakob Balslev, co-founder and CEO of Rokoko.

However, to create an authentic presence in XR, it is crucial for Jakob Balslev that the individual’s facial expressions and body language also translate to the digital world.

“Until you have your unique body language, you are not really present. Your family should be able to recognise you just by how you move – even if your character is a frog,” says Jakob Balslev.

So far, it’s not the XR industry that Rokoko sells most equipment for. But that’s probably only a matter of time, says Jakob Balslev. That’s why Rokoko has also started to optimise its equipment for the XR industry. Specifically, the problem is that the sensors on Rokoko’s suits and gloves that detect movement move over time.

“You can’t play piano in VR for an hour and still hit the right keys. At the same time, there’s a delay to your movements. And those two things are something we could optimise, but there hasn’t been much incentive to do so yet,” says Jakob Balslev.

That will change this autumn, however, when Rokoko launches a new product that is almost tailor-made for the XR. Jakob Balslev can’t reveal what the new product is yet, but he promises it will be a slam dunk for the market.

AR must be everyday

For many, augmented reality is still foreign territory. But Hololink wants to change that. The company makes it possible to create interactive AR experiences without coding that open directly in your phone’s web browser.

“We see it as our most important role to make it possible for all companies and organisations to start experimenting with AR as a medium before it completely overturns them in a few years,” Lucas Nygaard, co-founder and CEO of Hololink.

He compares the XR wave to the internet in the 1990s and social media in the 2010s. If you didn’t quickly jump on the trend of building a website or having a social media presence, you were quickly overtaken by all the companies that had already started experimenting.

“If smaller companies and organisations embrace XR, it’s not just up to the big Silicon Valley companies what the metaverse should be. We want to take it down to a simpler level where more people can participate,” says Lucas Nygaard.

Hololink has about 1,000 users worldwide, ranging from 3rd graders making AR Christmas cards to large international companies whose employees can quickly create a prototype and display it in AR.

“With our tool, the little guy on the floor can try out an idea and take it all the way up through the organization. They can quickly, and without coding, create a prototype that actually works,” says Lucas Nygaard.

That’s why he hopes companies and educational institutions will come out of the woodwork and embrace the medium.

“We’ve been talking about AR for years, we’ve seen all the big headlines and been to all the trade shows. But now we need to take the next step and find out what it looks like in everyday life. And we won’t get there if we all sit on our hands and wait for AR glasses to arrive. Because those who first make an AR strategy, when for example Apple launches an AR glasses, they will be run over,” says Lucas Nygaard.

In 2017, Connect 4 Climate organised an international pitch competition: how can you use VR to highlight a climate issue?

Danish production house Mannd, which specialises in XR storytelling, won the competition and the film X-Ray Fashion was created. The VR documentary focuses on the fashion industry and the environmental and climate challenges that come with producing huge amounts of clothes.

“Whether you’re into fashion or not, everyone has a relationship with the clothes they put on in the morning. So everyone can relate to the subject. We therefore chose to focus on the fashion industry, which is a slightly different take to the climate crisis than the one we usually see,” says Maria Engermann, owner of Mannd.

For example, the documentary takes the audience inside a sweatshop in India, where men and women sew clothes in squalid conditions. For Maria Engermann, however, it was not enough for the audience to see how their clothes were made. They also had to feel the heat of the cramped sweatshop, feel the water around their feet as the chemicals from clothing production are washed into the local river and smell the stench of the landfill where much of the clothing ends up.

“We wanted to go a step further, and our goal was to really make people feel like they were present in the clothing production. That’s why we decided early on that we also needed to use physical effects, because the tactile plays a huge role in whether or not you feel like you’re present. If we can create a strong VR experience that can really impress the audience, we might also have a better chance of changing their consumption habits,” says Maria Engermann.

And that’s where VR falls a bit short. Because although VR is a powerful medium, according to Maria Engermann, it doesn’t engage any senses other than sight and hearing. At least not yet.

“We need to figure out how to bring the tactile. Maybe it’s a suit you’re hooked up to, although that’s also a bit hard to imagine right now,” says Maria Engermann with a smile.

The post Culture has embraced XR, but still pushes barriers to what the technology can do appeared first on startupmafia.eu.