Cryptocurrency broker Genesis has warned of the risk of bankruptcy due to a negative “contagion effect” following the collapse of the FTX empire owned by Sam Bankman-Fried. The news triggered a new wave of panic and sent both Bitcoin (BTC), Ethereum (ETH) and a number of other digital assets to new local lows.

Bitcoin down after reports on Genesis and FTX

Bitcoin on Tuesday fell for the third consecutive session and now costs $15.7k. On Monday, the cryptocurrency gave back 3% of its value and briefly tested levels of $15,479, breaching local support from November 9-10 and testing more than 2-year lows.

Although bitcoin continues to balance on the border of the local support from the first half of this month, its clearer breakout could open the way for further depreciation. The next significant supports, on the other hand, are drawn only around the $12,000 level.

Bitcoin falls for the third day in a row and knocks out the $16k level. Source: tradingview.com

Lender Genesis is the latest victim to come under the spotlight following the collapse of cryptocurrency exchange FTX. Genesis said Monday that it has no plans to file for bankruptcy anytime soon, although Bloomberg News reported, citing sources connected to the case, that the company is having trouble raising fresh cash for its lending unit and warned investors that it may have to file for bankruptcy if it does not find financing.

What’s more, administrators collecting the remains of the bankrupt FTX have discovered that $3.1 billion is owed to major creditors. The scale of the debts has fueled fears that more digital companies could soon collapse.

Grayscale bitcoin trust below 50% of base BTC price

The market uncertainty is also reflected in one of the more popular regulated bitcoin-related products, namely the Grayscale Bitcoin Trust (GBC).

The Trust, which is the only cryptocurrency product traded on a U.S. exchange with direct exposure to Bitcoin, sold off, causing the discount to net asset value to be over 50% for a while. 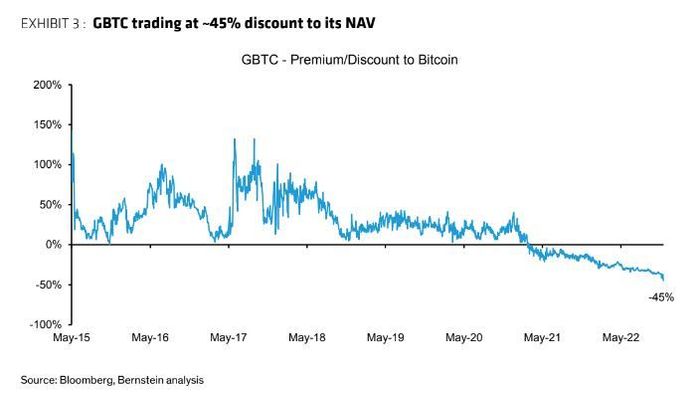 The widening discount reflects traders’ concerns that problems at Genesis could spill over and affect its parent company, Digital Currency Group (DCG). DCG is also the parent company of Grayscale, which manages the assets of the Grayscale Bitcoin Trust.

DCG is considered one of the “blue chips” of the cryptocurrency world. Nonetheless, Bernstein’s team, along with analysts at Bloomberg Intelligence, said the Genesis bankruptcy is unlikely to affect GBTC or DCG more broadly.

According to Bernstein, Digital Currency Group and Genesis hold about 10% of all GBTC shares, and the company could decide to sell those shares to meet its liquidity needs.

Bitcoin’s depreciation also dragged down the second-largest cryptocurrency market asset by capitalization, namely the Ether token, which is the native currency of the Ethereum network. After three days of declines, the ETH/USD pair is currently at $1091 and testing the November 9-10 minima.

If these are knocked out permanently, then Ethereum is only a step away from testing the psychological level of $1,000 and this year’s June 18 minima at $880.

Meanwhile, the strongest losing cryptocurrencies over the past 24 hours were Uniswap (UNI) and Polkadot (DOT) surrendering 3.5-4.9% of their value, and the memetic token Shiba Inu (SHIB) losing 3.5%.