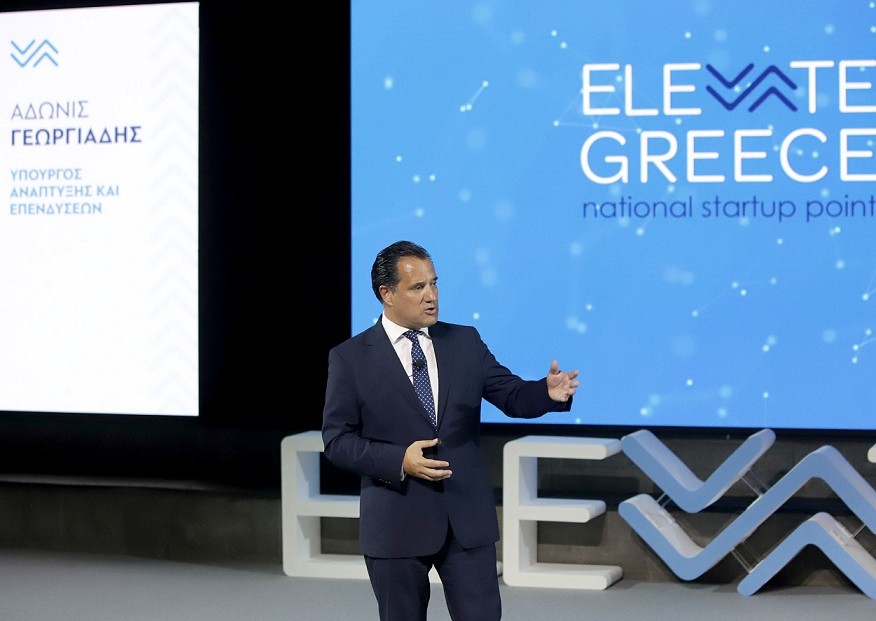 A decisive step for the identification and mapping of the country’s start-up ecosystem, which will also provide the tools for the development of a coherent policy that will favour and strengthen Greek innovation, was taken this afternoon with the inauguration by Prime Minister Kyriakos Mitsotakis of the digital platform Elevate Greece.

The inauguration took place at a special event at the “Athens School – School of Athens – The Athens School”. Irini Pappa” of the National Theatre in the presence of the Minister of Development & Development of Greece. Επενδύσεων, κ. Άδωνι Γεωργιάδη, των Υφυπουργών, κ. Χρίστου Δήμα και κ. Γιάννη Τσακίρη, του Γενικού Γραμματέα Έρευνας & Technology, Mr. Athanasios Kyriazis, representatives of start-up entrepreneurship and representatives of large companies who are joining as “Co-Presidents” of the great effort.

Elevate Greece is an “electronic portal” that aims to strengthen, develop and extrovert Greek start-ups. “The State is now embracing the ecosystem to the extent of its capabilities,” the Prime Minister noted, among other things, in his statement. “The State cannot substitute innovation and entrepreneurial activity, but as a State we are now acquiring a register of businesses that will define what constitutes an innovative start-up,” he said, explaining that the State’s mission is to create an environment conducive to the development of entrepreneurship and innovation.

At one point, the Prime Minister even wanting to link the flagship investment recently announced by Microsoft, showed a photo of the multinational’s founding team in 1978 that is widely circulating on social media with the question underneath “would you invest in this team?”, linking the image of the scruffy young people back then to what they eventually created!

“There are many restless spirits here in Greece too and they must have the means to claim success,” the prime minister stressed. “And the job of the State is to create the environment for this,” he added, calling on startups to enter the Elevate Greece platform in order to be favoured by the incentives that accompany such a move.

Themain objective of Elevate Greece is to promote networking among startups, as well as the possibility of promoting them at an international level. Their progress will also be recorded on the basis of critical indicators, making start-ups an attraction for investment angels and businesses from Greece and abroad. At the same time, they can participate in the National Awards for Start-up Entrepreneurship and have access to benefits and sponsorships from the Official Supporters of Elevate Greece, who are invited to support the development of businesses related to their field of activity.

The platform will include businesses that meet 2 key characteristics: a) innovation and b) scalability of the venture and will be judged by evaluators of renowned prestige in the fields of innovation and entrepreneurship.

For his part, the Minister of Innovation and Entrepreneurship, Mr. Mr. Adonis Georgiades, Minister of Development and Investment, spoke of a historic day “because on this platform many businesses, businesses that today we do not know who they are but that after a few years we may talk about them with admiration, will have started their journey through Elevate Greece and will have received from the state the support they needed and we must give”.

Earlier, the responsible Deputy Minister of State for Development, Mr . Dimas, who together with his team have been working on this project for a year, analysed the way and the benefits of joining the platform.

As he noted, the Elevate Greece platform has three main axes. The first one concerns the registration and mapping of start-ups in the country. “We will know where they are located, what their business is, etc. so that we have a complete picture on which we can build policies to promote the ecosystem,” explained Mr Dimas. The second is the establishment of a National Registry of Startups and the third is the support and development of Greek startups.

The objectives of the platform are:

-The official and reliable registration of startups
-The comprehensive mapping of the ecosystem and the networking of startups
– The monitoring of the progress of startups based on KPIs indicators
-The targeted support from the State
-The awarding of prizes and the provision of specialized support from the official supporters of the platform, which are 22 well-known companies,
-The promotion of extroversion and the attraction of investors, and
-The promotion of specialized jobs.

“Until today, the Greek State did not know how many start-ups exist, in which sectors they operate, how many employees they employ and what their turnover is,” Dimas noted. He added: “ElevateGreece is the necessary tool of the State for the targeted support of start-ups by offering specific incentives and benefits. I would like to personally thank the Official Supporters of ELEVATE GREECE who contributed greatly to the completion of the effort”.

A critical role in the design of the ecosystem strengthening through the platform was also played by State Secretary. Yannis Tsakiris, responsible for a series of financial tools and incentives that are being activated and which are expected to help the companies that will be part of the platform.

In fact, Mr. Tsakiris today announced a new measure that involves the coverage by the State of 50% of the salary costs up to the amount of 100,000 euros for start-ups that will join the platform.

“ElevateGreece today comes to significantly strengthen the Greek start-up and innovative business ecosystem. This initiative will be complemented by new financial tools, such as the Entrepreneurial Angels Co-Investment Fund, the GrantstoEquity program – the design of which is being finalized these days in cooperation with the Hellenic Development Bank Group – and the Technology Transfer Funds that will follow.” “In the immediate future, in order to meet the increased liquidity needs created due to the pandemic, start-ups will receive a new soft financing product or alternatively a repayable aid programme, which will finance 50% of their annual salary costs, with a maximum aid of €100,000. With a budget of €120 million from NSRF (EPANEK) funds, we aim to support more than 1,200 start-ups across Greece. The relevant call, in cooperation with the Hellenic Development Bank, is expected in November,” he said.

In order for a start-up to apply to ElevateGreece, in order to be registered in the Registry, it must meet the following requirements: