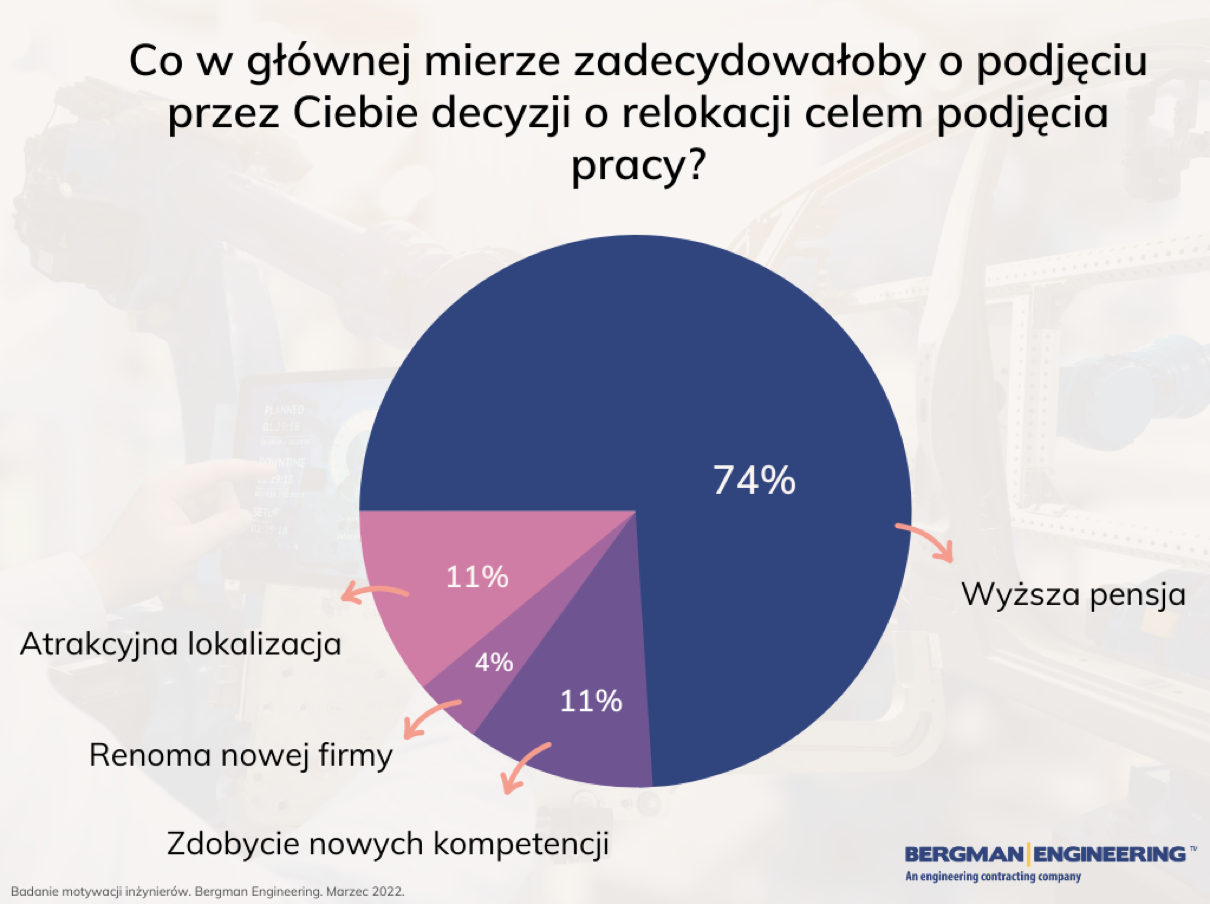 Poland lacks up to 80 thousand engineers

Back in 2018, Bergman Engineering conducted an estimate of the demand for engineers on the Polish market. According to their data, Poland needs about 70-80 thousand such specialists. This would mean that the earnings of engineers are hellishly high, right? After all, looking, if only after IT, it is the salary that plays the first fiddle when it comes to “tempting employees”. Or at least it was so in the beginning.

However, with engineers the matter is not so simple. Yes, you can find articles that even throw astronomical amounts. “Engineers in Poland already earn 15 thousand PLN!”, “How much does an engineer earn? More and more often even 20 thousand PLN!” etc. However, there is one big BUT – yes, such earnings are possible in Poland, but they concern only 10% of engineers. This is shown, for example, by the research of Sedlak&Sedlak company.

How much does an engineer earn? It is not a coconut

The Entrepreneur Magazine portal is not so optimistic and shows that the average gross income of an engineer in Poland is PLN 5400 and the median is PLN 6450. The highest earners are engineers specializing in telecommunications services. Here it is even 8000 PLN gross. And while these are not extremely low salaries, let’s not deceive ourselves – in the case of IT at a similar level of qualification you can earn much more.

Paradoxically, in the industry, you earn relatively little. And this is regardless of whether you are a serial employee, such as a packer, or a specialized engineer. Not much, of course, compared to the industry such as IT, mentioned hundreds of times (this will probably not be the last time, when this comparison will appear here).

However, it should be emphasized that the increases among engineers will happen. What’s more, experts point out that these increases will be in the order of 5-7% per year.

And here we come to one of the key aspects of the problem addressed. What most often causes engineers to change jobs? Pay. According to Bergman Engineering’s report: “Engineer Motivation Survey” as many as 74% of Polish engineers would relocate and change jobs if it was followed by a raise. Another 11% indicated that the possibility of acquiring new competences is important, and for 4% the company’s reputation is important. The remaining 11% emphasized the attractiveness of the location.

So, unprecedentedly, money wins here. So what kind of a pay rise are we talking about? 95% of the surveyed engineers clearly indicated – at least 15% more. The remaining 5% would be happy with an increase of 10-15%.

Bergman Engineering emphasizes, however, that according to their data – 80% of engineers received counteroffers from their employers when they were tempted with new positions. The most common counteroffer was a raise to the level offered by a competing company.

Where is the greatest demand for engineers?

Someone asks the question – why relocation is inevitably mentioned when asking about changing jobs? The profession of an engineer is quite difficult to perform remotely. You have to be on location, and that is mainly in industrial districts. Industry in Poland employs about 31.2% of all people and accounts for about 25% of GDP.

However, not all cities and regions in Poland are industrialized. The most prominent in this aspect are Silesia, Aviation Valley (north and north-western Subcarpathia), Pomerania, Łódź and Warsaw. And it is to these regions that engineers are most often attracted.

Nevertheless, more and more companies are opening up to the possibility of remote work, although it is quite complicated in industry. This is especially true without the passage of the Industry 4.0 revolution. This is problematic because, according to research by the Australian government, by 2026 approximately 75% of jobs in the fastest growing industries will require skills in the so-called STEM (science, technology, engineering, mathematics).

IT picking up potential engineers?

The new Polish engineer is engineer 4.0, who will have to navigate the digitized and automated world as well as the physical one. This can be problematic, however, as Polish companies are quite reluctant to digitize and do not really see the need to develop the digital competencies of their employees. The industry in Poland is also quite conservative, and the fourth revolution is still something that German or Italian industry is ahead of us in.

So what to do with the 80,000 hole? Wait or attract specialists from abroad. Or digitize even more, because I don’t think it will be patched up quickly by Polish experts. Why am I not so optimistic? Because technical and mathematical minds are effectively drained by the IT industry.

This can be seen, for example, after the 2019/2020 academic year. The most popular categories of study in this yearbook were medicine (about 35 thousand people), and in 2nd place – IT (over 32 thousand people). Construction was in 9th place (over 11 thousand students), management and production engineering in 11th (9.3 thousand), automation and robotics in 13th (almost 9 thousand), and mechanics and machine construction in 16th (8.1 thousand).

If someone is keen on more technical, mathematical or static projects – he/she will choose IT rather than engineering, because there simply will earn more, will not be so dependent on geolocation and will work in a younger, more flexible organization. It is these factors that often win out over a rather ossified industry.