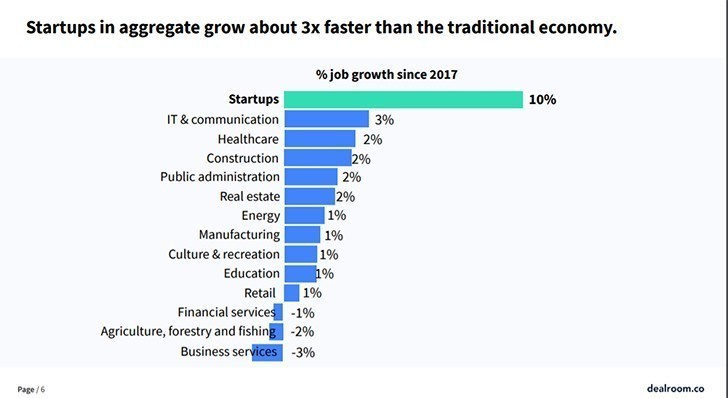 More important than ever in history is the economic impact of startups today, especially those in the technology sector, which is now a $35 trillion industry. In this environment, startups are a resilient source of high productivity job growth.

According to dealroom.co’s most recent data, startups are growing about three times faster than the traditional economy. At the same time, they are responsible for a 10% increase in global job growth since 2017. And they are at the top of the list of sectors of the economy that have the largest contribution to job creation.

In second place on this list is the ICT sector, which is responsible for 3% job growth in the period from 2017 to date. The health, construction, public administration and real estate sectors are responsible for employment growth of 2% each.

In dealroom.co’s list of industries that have contributed the most to job growth since 2017 to date, the energy sector follows with a 1% contribution to job growth. The manufacturing (1%), culture (1%), education (1%) and retail (1%) sectors have equal contributions.

The potential of start-ups to generate large and highly productive jobs is obviously enhanced by their ability to attract capital.

Startups are not only involved in increasing employment globally. They also have a major impact on the overall growth of the global economy.

According to research by dealroom.co, in collaboration with the International Economic Development Council, startups are growing three times faster than the global economy. In fact, the same data shows that younger generations of startups are creating just as much value as older ones.

“It is becoming increasingly clear that growing startups are the engine of economic growth and job creation in many markets around the world,” the study said.

“The fact that today a company can be created from anywhere makes local support even more important to foster individual startup ecosystems. Every startup ecosystem is different and so should its business support,” the analysts stress.

Greece’s economic growth is the most important source of income for the European economy, according to the European Commission