French startups attracted €458 million in venture capital investments in January through 60 deals. This represents a drop of more than 22% in funds raised compared to January 2020 (€592 million raised, 57 deals). Fintech was by far the most popular sector for investors in January, with 16 rounds of financing and €183 million raised, representing 40% of total funds. The next most popular sectors are mobile (€42 million) and retail (€38.8 million), followed by e-HR (€38.6 million). 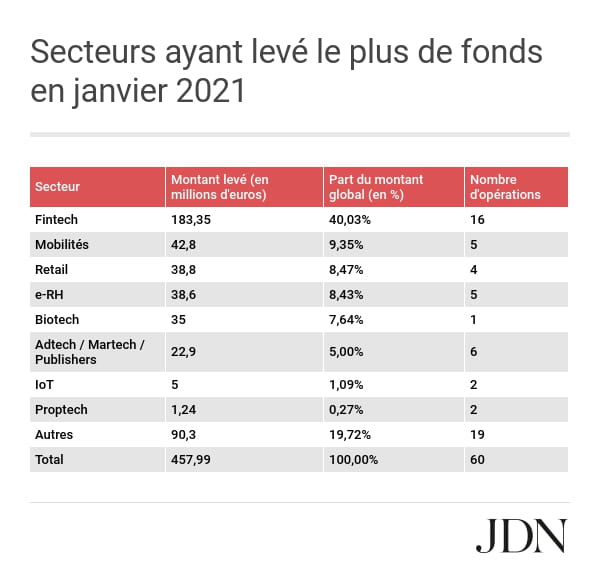 One fintech also took the top spot: Alma, a fractional payment specialist, raised €49 million just two years after its launch. After having started by offering its solutions to small and medium-sized merchants, the start-up is now targeting the major retailers to compete with the historical players in the sector. Number two, the biotech Corwave and its heart pump technology to fight heart failure, has raised €35 million. These funds will allow the company to finalize its product and start production. Corwave is on a par with two other start-ups, which have also raised €35 million: the temporary recruitment application Iziwork and the accounting manager for freelancers Indy (ex-Georges.tech).